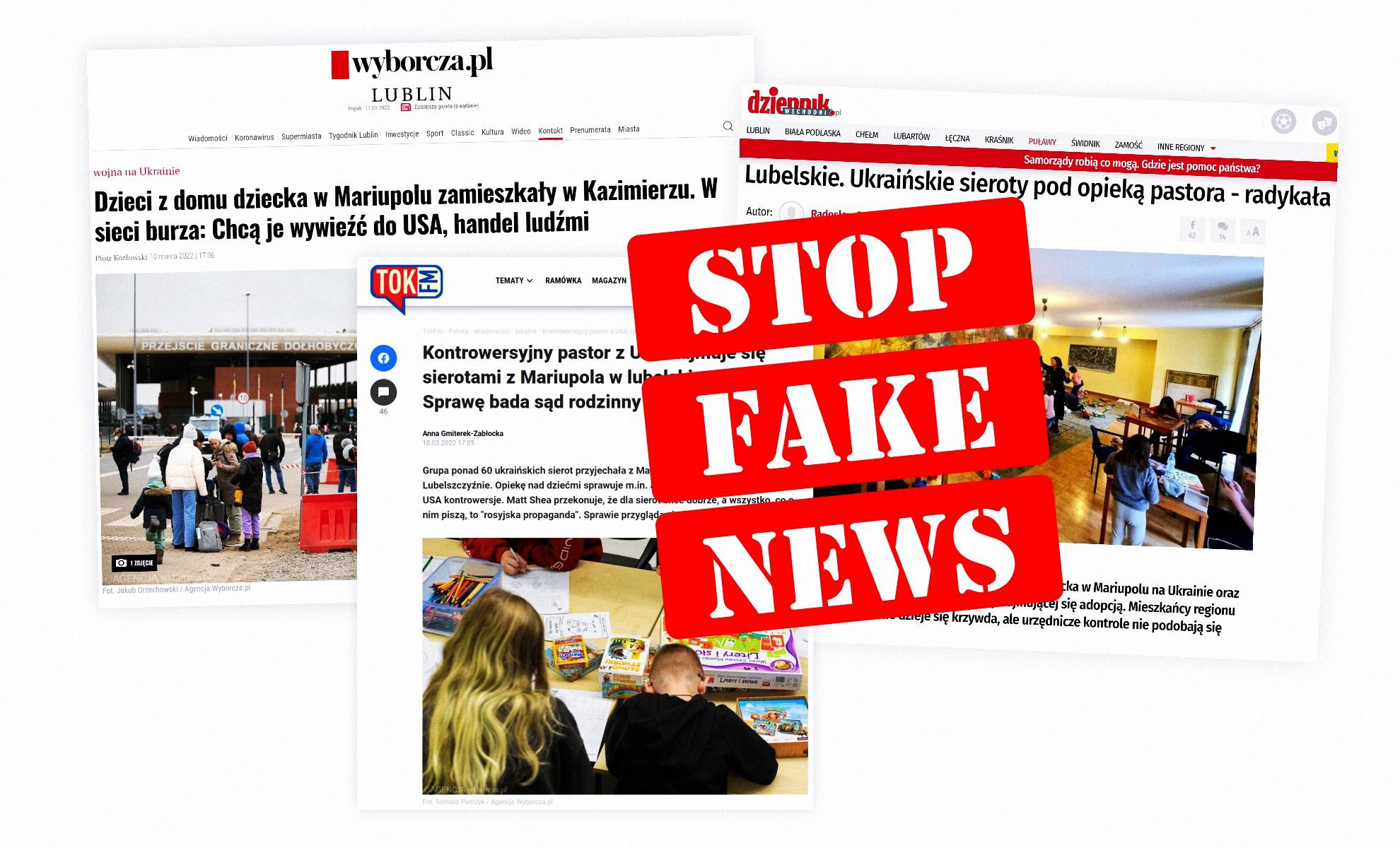 Recently, several media have published texts about Ukrainian children who were brought as refugees to Kazimierz Dolny by a group of Americans, Ukrainians and Poles. Unfortunately, some Polish media are fueling the atmosphere of scandal around this case and repeating many rumors and lies about the Americans who helped the orphans of Mariupol, saving them from the war. Below we present a retort to the texts published by Gazeta Wyborcza, Dziennik Wschodni and Radio TOK FM. At the same time, we appeal to journalists to report honestly and reliably on the situation.

Title: “Children from the orphanage in Mariupol living in Kazimierz. A storm on the web: They want to take them to the U.S., human trafficking”

The title falsely communicates that there is a plan to commit a crime and harm the children. In fact, the Americans took the children not to the United States, but from the war ground – from the bombed Mariupol – to a safe Poland. They do not trade children, on the contrary, sacrificing their time and risking their lives, the Americans save them completely for free,

Pastor Matthew Shea has been awarded many medals for the fight against terrorism. He is a veteran of the wars in Iraq and Bosnia. He has won the following awards: NATO Medal (2000), Medal for Achievement – several times, Commendation Medal – several times, Armed Forces Expedition Medal (2000), Medal for Glorious Service (2005), Order of Saint Maurice (2005), Bronze Star (2005), Expeditionary War on Terror Medal (2005). Pastor Shea’s Church has an organization that fights human trafficking, among others they made a film about it.

The author reproduces the slander and leaves without comment. The reader is left with the impression that “something is up”, instead of getting reliable information from the journalist that these are unfounded rumors. Would criminals report their activities openly on the Internet? Would they invite the consul of Ukraine to check if everything is in order? Would they involve many people they don’t know from all walks of life? Would they risk a personal trip to the bombed country? Would they count on the fact that no one in Poland would check the legality of their activities related to the care of over sixty children? The journalist, however, did not deign to express these or similar reflections showing the absurdity of the allegations of Internet trolls.

It is nothing but a vile insinuation and building a false narrative about allegedly shady pastors. Pastor Shea emphasizes that this is a false allegation and adds, “I actually trained and taught American soldiers exactly the opposite.” The facts are that while serving in the U.S. Army, which is known for modeling the Christian ethos, he was repeatedly awarded, m.in the Medal for Glorious Service or the Medal of Praise several times. Reproduction of nonsense from Wikipedia is not the best proof of the technique of the journalist of “Wyborcza”.

Nor is it true that Matthew Shea was removed from his position as chairman of the Republican Club in the Washington State House. Elections were held, on the normal date, and another person was elected to this position.

In fact, Pastor Chojecki heads the Against the Tide Television, which is known for advocating for an alliance of Poland, the United States, and Israel, makes documentaries about beautiful Polish-Jewish history, about the Righteous Among the Nations, and among the hundreds of guests of The Against the Tide Television there are characters from all worldview options in Poland – e.g. Rev. Prof. Andrzej Kobyliński, Jarosław Makowski, Artur Nowak, dr Bartłomiej Wróblewski, Jan Krzysztof Ardanowski, Bogdan Borusewicz, prof. Magdalena Środa, Eliza Michalik, Krzysztof Wyszkowski, rev. dr Leszek Gęsiak (spokesman of the Polish Episcopal Conference), ed. Piotr Pytlakowski, ed. Jerzy Haszczyński, Mayor of Poznań Jacek Jaśkowiak.

By the way, the author repeats the slander that appeared during the trial of Pastor Chojecki, as if he said about the Polish nation that “Poles are nits” – which in fact was an opinion only about a certain subgroup of malicious people from Poland. The author also wrote that Pastor Chojecki “was convicted” – although the verdict in his trial is invalid, which in practice means that he is innocent in the light of the law, as said in IPP TV by attorney Michał Hara from the Office of the Commissioner for Human Rights. Appeals have been filed against the verdict, the case is not resolved.

It is not true that Senator Jacek Bury today describes the Church of the New Covenant in Lublin as a sect. Recently, a court in Warsaw ordered another entity, TVP Info, to apologize to the KNP in Lublin for calling it a cult in one of the publications on the website. KNP in Lublin is a church formally registered and operating by the law.

The organization’s website at http://lovingfho.com is in operation and was in operation in the days leading up to the publication of the article.

Volunteers of the Homo Faber Foundation (which operates the telephone number of helping Ukrainians, acting under the President of Lublin), helped in finding a place in the Journalist’s House in Kazimierz Dolny.

As Pastor Shea points out in response to the allegations, “It is not true that I preach radical religious views, my church’s creed is consistent with the recognized dogmas of mainstream Protestant churches.” The text in the Eastern Daily is therefore an expression of intolerance for the standard views of Protestant Christians.

As the Americans retort: “We did not like the behavior of a person who did not want to identify themselves and demanded access to the children.” In addition, they criticized the creation of a situation in which the inspections were carried out in such a way they aroused fear in children.

These are people well known to the Ukrainian side, they have been helping the Mariupol orphanage to find new Ukrainian families for children in the USA for years.

See the answer in the part of the retort concerning Gazeta Wyborcza, point 3 above.

In fact, the activities of Pastor Shea and the American organization looking for homes for orphans are carried out legally, the procedures are carried out in cooperation with the governments of the USA and Ukraine and with the required court approvals.

The right to care was granted to the Americans by the Ukrainian side, which in this case decides what the author knows because he himself quotes the statement of the Lublin voivode on this subject. Americans are connected to the orphanage much more strongly than through “donations” and do not do with children “what they want”, but what it takes to keep them safe and well-groomed. Every day, dozens of volunteers from the New Covenant Church in Lublin and from among the residents of Kazimierz Dolny and the surrounding area help the Americans in caring for the children.

These documents were and are available online, e.g. at: https://opencorporates.com/companies/us_tx/0803077637

An absurd sentence after numerous checks carried out in this case by the police and other entities authorized to do so. Pastor Shea responds, “An appropriate explanatory statement has been published and we have answered all the questions from the local authorities.”

Title: “A controversial pastor from the USA deals with orphans from Mariupol in a Lublin center. The case is being investigated by the family court.”

An unfounded suggestion that children are being taken care of by someone dangerous, or even that something bad has already happened.

As the pastor responds, “It is not true that I indoctrinate young people and radicalize their views, the profession of faith of my church is consistent with the recognized dogmas of mainstream Protestant churches.”

The right to custody of children is confirmed by the Ukrainian side. In addition: “It is not true that ‘children in custody have been taken over by a random organization.’ We did not take care of the children after they arrived in Kazimierz Dolny, but we brought them to Kazimierz from Ukraine, and the organization Loving Families and Homes for Orphans is not ‘random’, but cooperated with the orphanage in Mariupol before the war and was asked by the management to help evacuate children from Ukraine.” On the spot, direct care for children is also provided by two caregivers from the orphanage in Mariupol.

Numerous audits have been carried out by various entities. None of them showed any irregularities. The author knows this because she writes about it later in the text. However, she decided to include in the text information that the psychotherapist was “afraid”. As a result, it sows in readers the suspicion that something bad may be happening.

Registration was made in 2018. Documents are available, for example, at: https://opencorporates.com/companies/us_tx/0803077637.

The actions of the Americans are transparent, the fears of psychologists quoted anonymously are based on rumors and slander. Informing readers that someone has disturbing feelings if they can’t give legitimate reasons for the condition is irresponsible.

But what is his accusation about? What are the grounds for this, what justification does it have? Was the author of the report at the Court on the spot in Kazimierz, or does he only reproduce Internet gossip and Russian propaganda? We don’t know. Certainly, asking these questions would not help to fuel the atmosphere of scandal. Unfortunately, the author of the article does not provide this information.

Such a formulation may suggest that the Ukrainian institution is afraid that something is wrong with the American organization. In fact, the reason for giving up aid in Poland was the fear that another orphanage would be used by Russian propaganda. 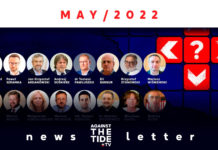 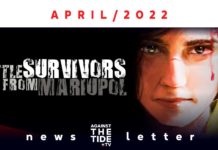