AGAINST THE TIDE TV NEWSLETTER – FEBRUARY 2022 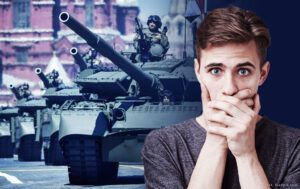 So it is war then! Putin invaded Ukraine. On February 24 at 4:45 a.m. local time, Russian troops from Russia, Belarus, occupied Crimea and Donbas entered Ukraine. Rockets and bombs fell on Kyiv, Kharkiv, Odesa, Lutsk, and many other places. In Against the Tide TV, we talked about it with Hanna Shen, Eli Barbur, and pastor Paweł Chojecki. We tried to answer the questions: what will happen next? what to do? how should an ordinary person behave in the face of a real threat? how can we help Ukrainians? We also talked about Russian propaganda and disinformation that is intensifying and will hit us during the Russian invasion, about the role of China and the benefits that Putin’s armed aggression may bring Beijing, as well as the need for a total blockade and isolation of Russia in the international arena.

The editor-in-chief of Against the Tide TV commented on current events: “It must be made clear that Putin was not punished for [what he did in] 2014 and that is why now he has done what he has done. Had there been a harsh reaction from the West to the annexation of Crimea and the rise of Putin’s puppet states, which have now asked for intervention, we would not have a war on the borders of Poland, the EU, and NATO now. This is the breeding of the ‘Russian Hitler’ and today we have the fruit of that.”

Pastor Paweł Chojecki pointed out that it was at the Olympics in communist China that the last details of the invasion of Ukraine were determined. He also spoke of the need to impose sanctions on both Russia and the People’s Republic of China in order to stop the communist invasion of Europe.

It is worth recalling that Against the Tide TV had warned about the important role of communist China in this dispute. We said that China would push Russia to “challenge” Western Europe. Such a thesis was put forward by both Ph.D. Tomasz Pawłuszko, who hosted our television, and Hanna Shen.

Against the Tide TV also hosted Matt Shea, a former Washington state representative, who commented on current military activities in Ukraine and the reaction of President Joe Biden and his administration to Russian aggression.

Pedophilia and sex scandals in the Catholic Church 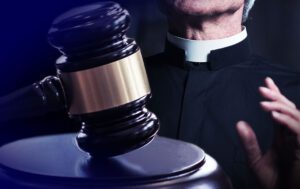 Janusz Szymik, a victim of a pedophile priest, decided to join the path of civil proceedings after the church court swept the case under the rug. He demands compensation from the Diocese of Bielsko-Żywiec in connection with the abuses committed against him by Fr. Jan W. On February 17, the first court hearing in this process took place.

In Against the Tide TV, Janusz Szymik’s lawyer Artur Nowak, Onet editor Szymon Piegza and Tomasz Idzikowski, a victim of a pedophile priest, commented on the case. Our guests talked about the impunity of Catholic clergy and the clergy’s disregard for Polish law, as well as the powerlessness of the justice system against pedophile priests.

Szymon Piegza, a journalist of the Onet.pl, told us about the course of the trial and the difficulties encountered by the justice system in this case: “The court asked for documents from the Krakow Curia, but did not get them, because the curia claims that they do not exist. Unfortunately, we are not able to verify whether the Krakow Curia is telling the truth in this respect or not. (…) Of course, I have repeatedly addressed the Cracow Curia with such questions and so far I have not received any answer. (…) The worst thing is that the Polish court is also not able to verify it.”

Darwin's Day - discussion on TV Go Against the Tide 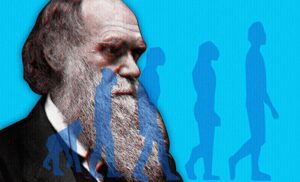 On the anniversary of Charles Darwin’s birth, i.e. February 12, “Darwin Day” is celebrated. This holiday commemorates the “father of evolution” and popularizes his theory, which assumes the evolution of species by natural selection. We invited Professor Krzysztof Kilian, Radosław Kopeć, and PhD Małgorzata Gazda to discuss Darwin’s contribution to contemporary science. We talked about how the theory of evolution eliminated God from science and culture, how it changed people’s approach to morality and the understanding of good and evil.

6th birthday of Against the Tide TV 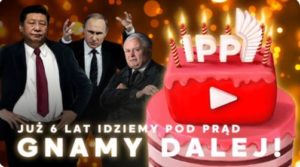 This month we celebrated the 6th birthday of Against the Tide TV, which began its daily broadcasting on February 1, 2016. On this occasion, we broadcast an anniversary program in which we summarized six years of our work and talked about plans for the future. The program was attended by: the editor-in-chief of Against the Tide TV, pastor Paweł Chojecki, editors Michał Fałek, and doctor Małgorzata Kubicka.

On the occasion of the 6th anniversary of broadcasting, we received best wishes from Art Thompson, former head of the John Birch Society, head of Epoch Times in Europe Manyan Ng, editor Eli Barbur, Ph.D. Tomasz Pawłuszko and many thanks and warm words from our viewers.

Young people from Against the Tide TV hosted a Q&A session with Pastor Paweł Chojecki, who had to face difficult questions. 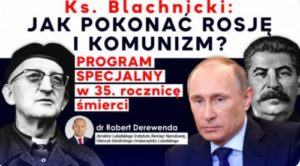 Director of the Lublin Institute of National Remembrance about Father Blachnicki

On the 35th anniversary of the death of Fr. Franciszek Blachnicki, the founder of the Christian service for the liberation of nations, we broadcast a special program “How to defeat Russia and communism?”, in which Ph.D. Robert Derewenda, director of the Lublin Institute of National Remembrance, was a guest. 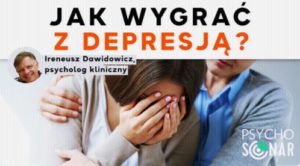 In connection with the World Day of Fighting Depression, we hosted Pastor Ireneusz Dawidowicz from the Baptist Church in Bialystok, a clinical psychologist, a therapist who spoke on our TV on how to deal with depression and win against this disease. 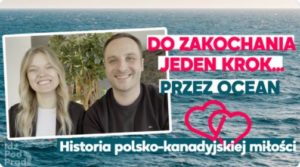 On the occasion of Valentine’s Day, we invited Peter and Kasia, who talked about Christian engagement.