Home China General Spalding: China has to be held accountable for spreading the virus!... 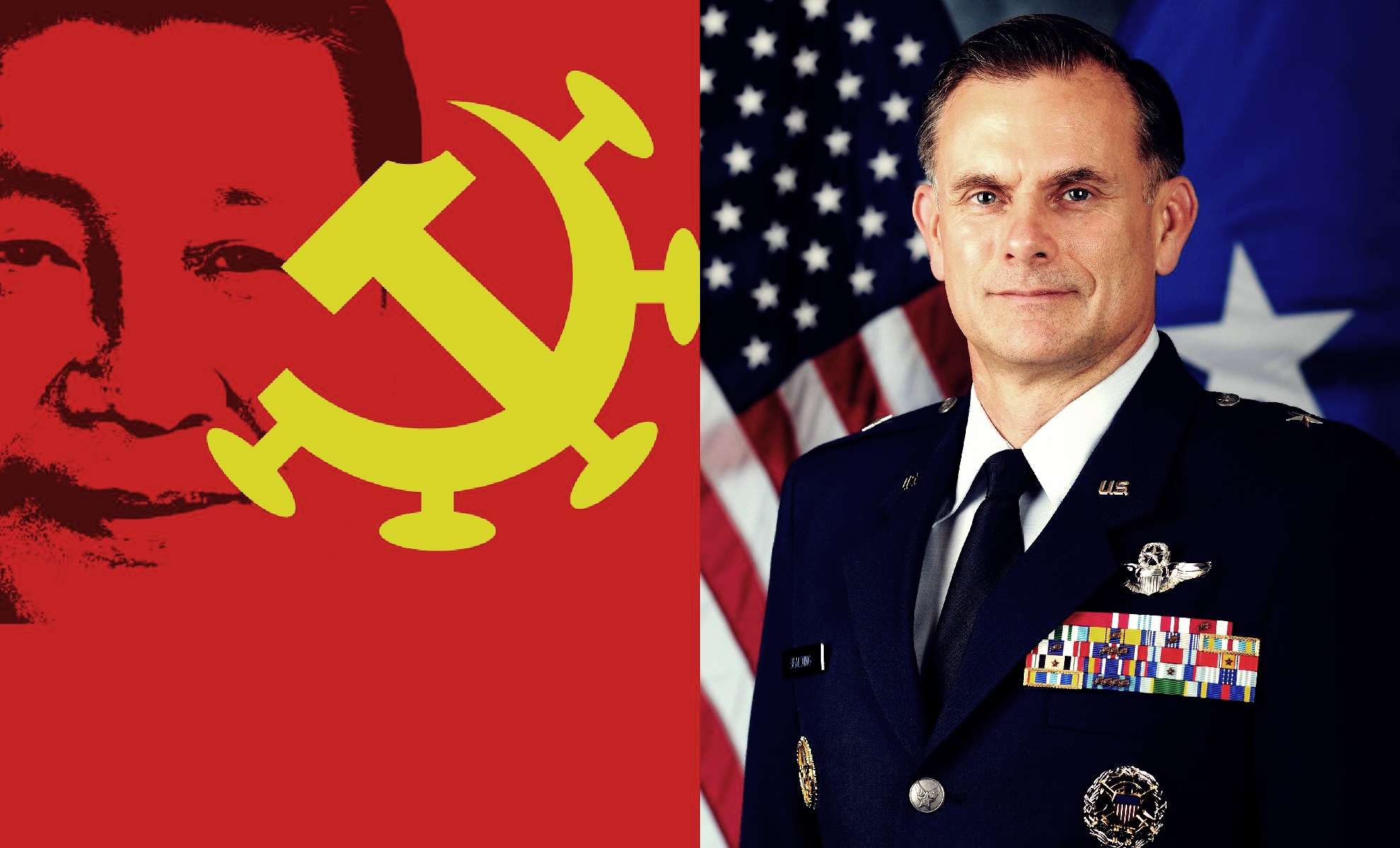 PLA colonels, in a document from 1999, talk about the use of viruses as one mean of attacking democratic societies. […] Covid19 goes all the way back to November. […] Chinese Communist Party officials refuse to get the truth out, when we could have stopped the spread of this pandemic. Instead, now we have it all around the world. This fact this is a global pandemic is 100% the responsibility of the Chinese Communist Party, says general Robert Spalding, former China adviser to President Trump and Donald Trump’s former Senior Director for Strategy in an interview for Against the Tide TV.

Eunika Chojecka: General, last year you wrote a book „Stealth War: How China Took Over While America’s Elite Slept”. You warned people in America and in the world against communist China’s will to conquer other nations economically, politically and militarily. But did you ever predict that communist China would create a lethal coronavirus and spread it all over the world?

Gen. Robert Spalding: As I was writing my book, I talked about Unrestricted Warfare, a document that was written by two People’s Liberation Army colonels in 1999. In that document, they do talk about the use of viruses as one means of attacking democratic societies. Of course, they talk about using all means, including lethal and nonlethal means to attack stronger opponents to weaken them in order to defeat them. As a communist regime they’re not forthcoming and they are all about control and secrecy, so we really have no idea whether or not this virus was created in a lab or in the wild, whether it was released, if it was created in the lab, whether it was released on purpose or by accident. We don’t know for instance, what the true air quality in Beijing is, because the communist government is afraid of criticism, and therefore doesn’t provide the proper numbers. It is a challenge of a communist regime which is in an open globalized system that it tries to be so nontransparent and controlling and secretive. This is one of the great challenges, one of the reasons that all around the world today people are essentially stuck in their homes hiding from a virus that could have been contained if properly dealt with in China. Certainly, if it was purposely created or purposely released or even accidentally released, then you have to ask yourself: why do we do business and associate with such a horrific regime?

EC: There is a new narrative about the origin of the virus. It is said in Poland that the USA created the virus and infected Chinese people in Wuhan and that there was an event in which American soldiers took part in Wuhan. How would you respond to this theory?

RS: It’s actually quite funny. Anybody who has lived in China knows how big the People’s Armed Police and the ministry of state security are, with all the cameras they have everywhere. They released the BBC reporter in Beijing and found him in 9 minutes just using their artificially intelligent cameras. It is true that they have extremely strict border security. As a defense attache in Beijing in 2017, all of the people that work for me were heavily scrutinized at all times, always had somebody following them. So the idea that somehow US Army would be in China doing anything is absolutely ridiculous. The Chinese Communist Party knows this. Anybody who has lived in a communist country, particularly one that has advanced surveillance technology like the Chinese Communist Party does, would know how ridiculous their statement that this came from the US Army is. It clearly came from somewhere in Wuhan, China. That’s where it originated. Everybody knows it. It’s not a secret. That’s where the epicenter of most of the infections and deaths is. If any of the numbers from China are to be believed… I think the Chinese Communist party has zero credibility when they say it was created by the US and released by the US Army in Wuhan.

EC: Polish people say that it is impossible for the Chinese to create and spread this virus because the first people who were killed by the coronavirus where Chinese. And Chinese government would not kill their people.

RS: That’s pretty funny, it’s really ridiculous on its face because Mao Zedong himself killed at least 40 million Chinese people, all for political purposes, for his own political control over the Chinese Communist Party. It really had nothing to do with anything but the cult of Mao Zedong, so the idea that Chinese Communist Party officials could kill for political purposes has already been done to tens of millions of people.

EC: Let’s move to Poland. Polish President Andrzej Duda praised Xi Jinping, quote, “for quick and decisive reaction which no doubt prevented the further uncontrolled development of the epidemic and thus saved many lives both in the People’s Republic of China and in other countries”. Should EU leaders praise Xi for his actions in regards to the pandemic?

RS: That almost reminds me of a statement made in former Soviet times when somebody was praising the Soviet Union and the truthfulness of the Soviet Union. It’s absolutely ridiculous. The Chinese Communist party was not truthful. They have not been truthful. They really delayed allowing WHO officials in. They control almost completely the narrative that comes out of the WHO. They haven’t allowed CDC representatives to be inside China to understand where the origin of this virus is. The Chinese Communist Party deserves no praise, unless of course you want to praise them in the same manner that satellite states were forced to praise the Soviet Union during the Cold War.

EC: How can Polish economy defend itself against the fall caused by the coronavirus?

RS: I think the good point that comes out of this tragedy is that we all realize now that our supply chains being dependent on the Chinese Communist Party is incredibly dangerous for our democracy and for our society, for our economies, for the health and welfare of our people. The fact that all of our medicines and N95 masks all come from China… You’re going to see in the United States and in probably, hopefully, countries like Poland, the return of the supply chain to the countries where the products are used. The United States should be, in the near future, investing in manufacturing and infrastructure, STEAM education, research and development. I would hope that Poland and other democracies in Europe and around the world would be doing the same thing.

EC: Today, our TV together with our Taiwanese correspondent Hanna Shen, started a petition to President Donald Trump to hold the Chinese government accountable for the coronavirus. It is on the White House website. You can sign it. We have 30 days to gain 100,000 signatures. Why should China be held accountable for the pandemic?

RS: It’s clear that the outcome of the virus is in the initial stage. The first known case, I believe, goes all the way back to November of last year. Of course, we didn’t hear about it till late January of this year because Chinese Communist Party officials refuse to get the truth out, when we could have stopped the spread of this pandemic. Instead, now we have it all around the world. The reason this is a global pandemic is 100% the responsibility of the Chinese Communist Party. No doubt about it.

EC: What does America do to prevent spreading the coronavirus?

RS: What we all must do… Because the Chinese Communist Party delayed the response to this, people around the world have to do social distancing and minimize contact for a number of weeks, so that we don’t allow for the spread of the virus, so that our medical professionals will be able to handle it as it spreads. We want to slow the spread and, hopefully, give time for the medical profession to be able to deal with any cases, but also to work on a on a vaccination, which hopefully will be soon forthcoming.

EC: How do you view the actions of WHO? The organization seems to be totally controlled by the Chinese Communist Party.

RS: I think it’s clear and everybody understands that the WHO has been influenced by the Chinese Communist Party. It is really a testament to how the Chinese Communist Party has infiltrated not only global institutions like the UN and World Bank, but also domestic politicians in corporations all around the world, using their influence with economics, money and market pull for the Chinese people. This is something that gives us an opportunity to reflect on the danger of bringing totalitarian regimes into the midst of democracies, regimes that don’t believe in freedom and democratic principles, human rights and civil liberties and free trade. All the things that essentially we were determined to fight for during the Cold War have been reversed because we brought such a such a totalitarian regime into the democratic mix. We need to now, once more, go back and focus on our principles, on democracy, on freedom, on human rights and civil liberties and free trade, and work together as democracies to put pressure on totalitarian regimes to essentially stop the spread of their influence.

EC: Thank you so much for this interview. We do recommend to your book “Stealth War”.

RS: Thank you so much. It was great to be here.