November 11 Movement supports the decision made by President Donald Trump  and his administration to eliminate Qasem Soleimani, widely considered in the international community to be a terrorist. At the same time, we would like to remind that Poland and the United States share a historical and civilizational alliance of defending Christian freedom and values. Ever since the American Revolution, Free Poles have always stood alongside Free Americans.

In the current geopolitical situation, we clearly see the rise of a new Empire of Evil: communist China, imperial post-Soviet Russia and militant Islam with Iran at the forefront. The entire Free World, especially the countries of Central and Western Europe, should stand firmly with the United States, the largest Christian republic in the history of humanity, to defend our civilization, freedom and life.

November 11 Movement calls on the President and the Government of Poland to take a clear position as an ally of the US in the ongoing conflict of civilizations, against the new Empire of Evil. 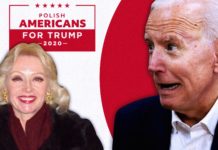 Biden is not fit for President – Polish Americans Coalition for Trump