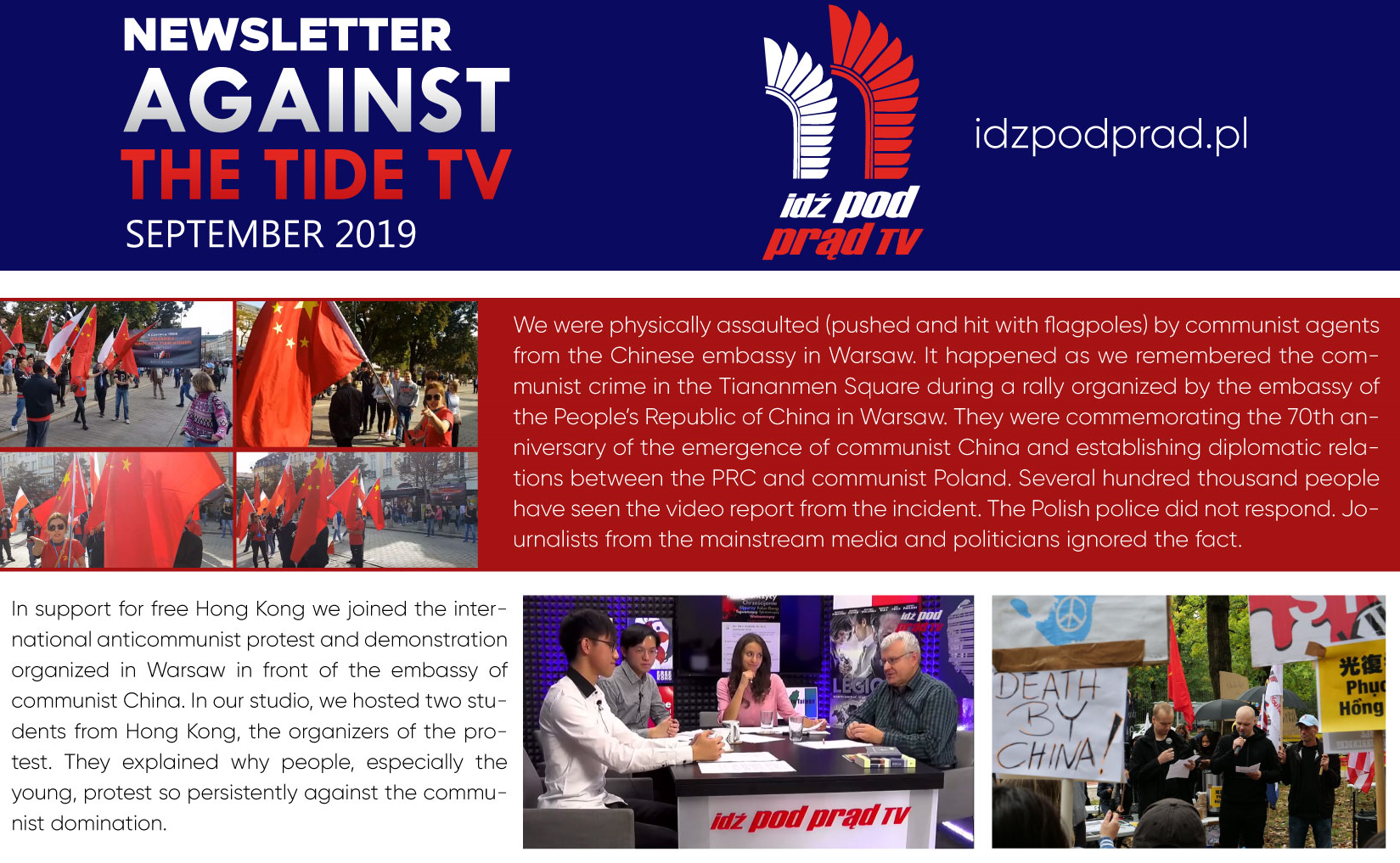 We were physically assaulted (pushed and hit with flagpoles) by communist agents from the Chinese embassy in Warsaw. It happened as we remembered the communist crime in the Tiananmen Square during a rally organized by the embassy of the People’s Republic of China in Warsaw. They were commemorating the 70th anniversary of the emergence of communist China and establishing diplomatic relations between the PRC and communist Poland. Several hundred thousand people have seen the video report from the incident. The Polish police did not respond. Journalists from the mainstream media and politicians ignored the fact. See the report from this event.

In support for free Hong Kong we joined the international anticommunist protest and demonstration organized in Warsaw in front of the embassy of communist China. In our studio, we hosted two students from Hong Kong, the organizers of the protest. They explained why people, especially the young, protest so persistently against the communist domination. See the interview in English.

The new issue of the Against the Tide magazine got published. The leading theme of the issue is the motto, “Choose Freedom.” During the visit of the vice-president of the United States, Mike Pence, we were able to interview Edward Mosberg, a 93-year-old Polish Jew and Holocaust survivor. He has been President Donald Trump’s guest a number of times.

We have launched our TV’s English-language webpage, againstthetide.tv. We are encouraging you to get familiar especially with our note about marginalizing – or even censoring – the speech given in Poland by Vice-President Pence:

The English version of our animation, “Apocalypse is Not a Fiction,” is available on our channel.

We were saddened to hear about the media attack by leftist circles (POLITICO, Guardian) on Liberty University, the largest Christian university in the world, characterized by their strong involvement in politics on the right and support for President Donald Trump. To encourage the Liberty University community and thank them for their example and inspiration we recorded a short video clip.

In order to demonstrate to what degree Polish intellectuals have acquired leftist mentality in the aftermath of the communist era, we are including an excerpt from a statement by the conference of rectors (presidents) of all the Polish institutions of higher education.

They threaten disciplinary action against any academic, who would dare to express criticism of the LGBT ideology. We are hoping that this will bolster your understanding of the urgent necessity for establishing the first Christian university in Poland.

In September, we sent out a letter to churches and pastors in Poland informing them about our plans to establish a Christian university in Poland and requesting their participation in the project. Here is the content of the letter in English.

The first edition of the book, “Difficult Verses,” by Pastor Paweł Chojecki, discussing problematic verses in connection with the eternal security of believers sold out very quickly. We have already got the second edition supplemented by an index of Bible verses. Here is an ad for the book.

In the middle of September, we hosted the Israeli band Miqedem. They are one of the most popular music groups of Messianic Jews in the world! There is a short video report from the concert on our channel. This was a great opportunity to meet in Lublin people from other churches. We even had guests from Romania.