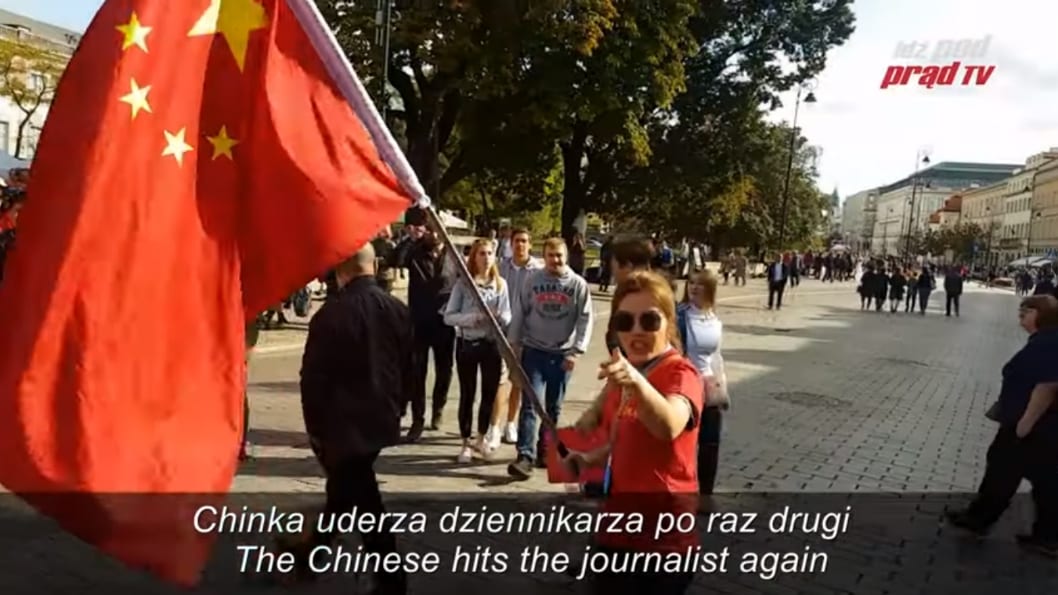 “Communist Chinese became aggressive, purposely hitting our banner, hands and camera with their flag poles. One Chinese woman shouted at us objecting to being recorded without permission! At one point she hit the camera really hard.” “They were also trying to bribe us, one Chinese showed up with a bundle of hundred-zloty bills and invited us to the cafe to talk”, the course of events in the capital is reported by Mateusz from the Against the Tide Warsaw club, who filmed the whole incident.

This attack on Poles took place this Saturday in Warsaw, on Krakowskie Przedmieście street. During a celebration of the 70th anniversary of the rise of communist China and the establishment of diplomatic relations between the People’s Republic of China and communist Poland (Bolesław Bierut – Mao Zedong, 1949). Against the Tide Warsaw club showed up to remind the Poles of the crimes of Communist Chinese regime at Tienanmen Square, where 30 years ago on June 4, 1989, communists murdered an estimate of 10,000 peaceful protesters. To this day, in communist China, it is forbidden to talk about the massacre at Beijing’s Tienanmen Square.

VIDEO from the scene of the incident

Just before the speech of the Chinese Ambassador, Against the Tide Club members stood on the street with a banner saying: “June 4, 1989. The Tienanmen Square Massacre. We remember.”

“We did not enter the area of the event, we did not block the passage”, says Mateusz from the Against the Tide Warsaw Club.

“Our banner began to spike interest and positive reactions of passers-by. People started taking pictures. At this point, a group of Chinese people took out their Chinese and Polish flags, and attempted to block us out, covering our banner. Our club members have moved with the banner a few meters away, behind the Ambassador’s car. Communist Chinese followed us, carrying the flags attempting to blocked out the banner again. At this point, an elegantly dressed Chinese woman began to talk to us in Polish, telling us to go away and stop interrupting their party. When she was told that the club members were not entering the area of their event, were not disturbing its course, only standing on a Polish street, she got nervous. She then returned to the other communist Chinese carrying the flags, pushing them towards our club members (which can be seen in the film). The lady told them to follow us like a shadow and block out the banner”, said an eyewitness to the events.

Despite the fact that Poles were standing on the street peacefully, the communist Chinese attacked them: “At one point we were at the opposite side of the street, quite far from the Chinese party, but the Chinese with communist red flags approached us again. They became aggressive, purposely hitting our banner, hands and camera with their flag poles. One Chinese woman in dark glasses was particularly aggressive. She shouted at us, objecting to being recorded without permission! At one point she hit the camera really hard”.

“They feel in Poland like in China. They think they have the right to ban Polish media from filming! #Chinazi”, editor Hanna Shen, Against the Tide TV correspondent in Taiwan, commented on the scandalous situation in Warsaw.

However, Polish activists and journalists were not intimidated. They exercised their rights and peacefully protested on Krakowskie Przedmieście. However, the Chinese, whose country is known for corruption, did not give up: “There was also an attempt to bribe us, one Chinese in a leather jacket showed a bundle of hundred-zloty bills and invited us to the cafe to “get along”. We’ve documented this in our video”, says the coordinator of Against the Tide Warsaw club. Poles were not bribed and stood undeterred with a banner on the street.

Despite the physical attack of these Chinese on Poles, no police appeared at the scene. Poles did not experience any help from law enforcement officers.

However, ordinary people responded positively to the Against the Tide’s banner: “People’s reactions, both Poles and foreigners’, were very positive. They were surprised by the way the Chinese acted, that they attempted to cover our banner so intensely and did not allow us to stand still. Nobody may have stood up for us, but we saw that they supported us. A lot of people took pictures, showed friendly gestures, expressed positive attitude towards us”.

The Chinese event calls into question the anti-communist approach of the Law and Justice government. These “celebrations” are part of the campaign to promote communist China in Poland. No wonder, since President Andrzej Duda himself raised the rank of strategic partnership with China (concluded by President Bronisław Komorowski) to a comprehensive strategic partnership.

It is worth mentioning that at the same time, on Piłsudski Square, a near 3 min walk away from the place where commemorations of the communist Chinese were taking place , another event “Spark of Remembrance” was under way, dedicated to Poles murdered by Russian communists in the Katyn forests in 1940.

Paradoxically no self respecting Pole would ever agree to propagation of any form of Russian communism in Poland, but at the same breath most would turn a blind eye to Communist practices sponsored by the current murderous Communist Chines regime.