Home Frontpage The fight of the government with the free media did not start... 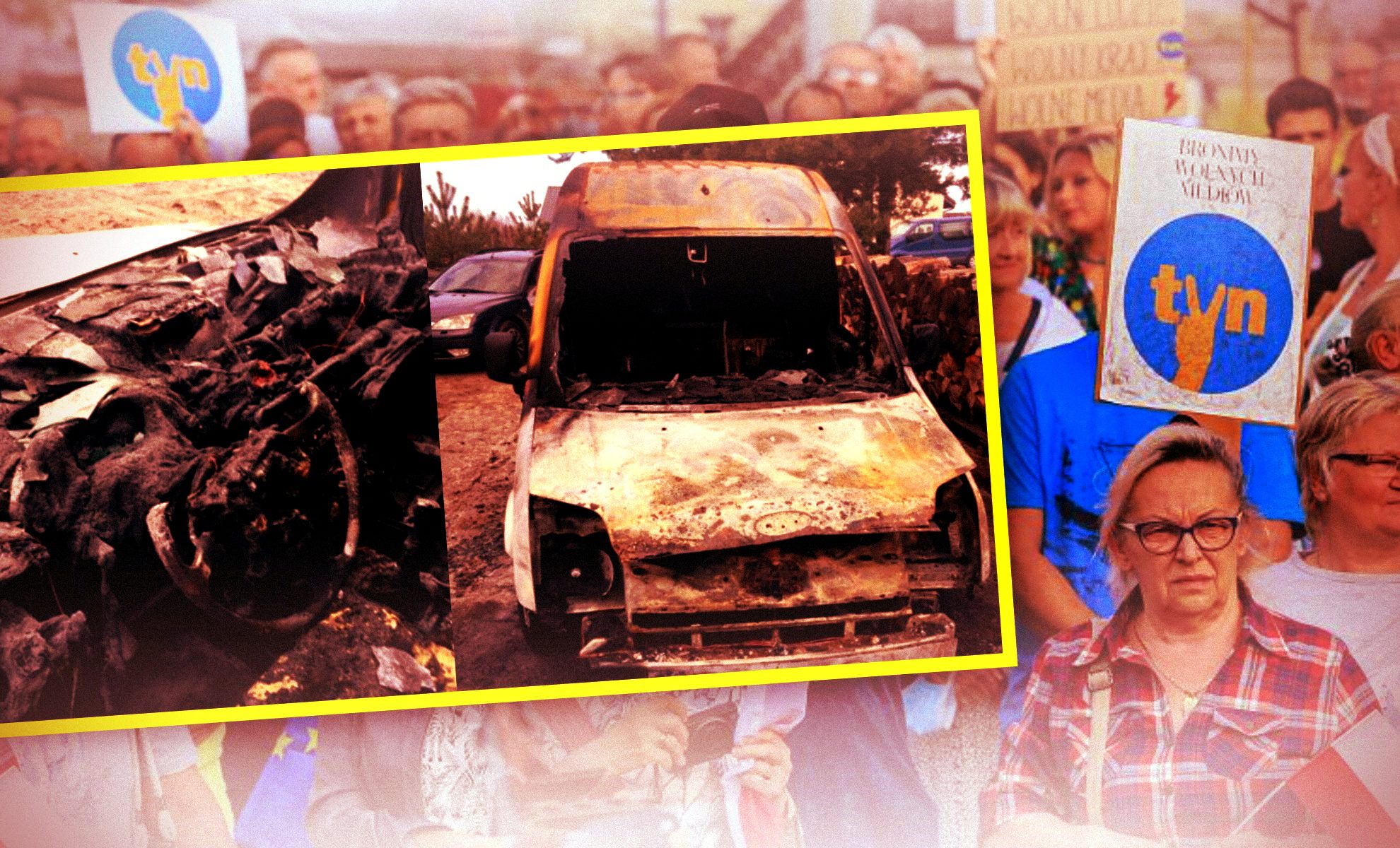 “They came for us, they will come for you. Or they will castrate you and only then leave you alone”, say journalists from one of the Internet TV stations in Poland. World public opinion is outraged by the amendment to the media law, pushed by Law and Justice, the so-called Lex TVN, which the Polish Sejm voted on in early August this year. It prevents the broadcasting of radio and television media outside the European Economic Area in Poland. Although the Polish government denies this, the amendment is in practice aimed at TVN, which belongs to the American Discovery group. The government coalition’s reluctance to TVN is confirmed by the fact that the government-dependent National Broadcasting Council has not extended TVN’s broadcasting license to this day, despite submitting an application in this matter in February last year. The existing license expires on September 26, 2021.

However, the fight between Law and Justice and the free media began much earlier. First, efforts were made to silence the smaller stations by probing whether the society and the journalistic community would express solidarity with the small media that were persecuted, and then cracked down on larger entities.

This was the case with an independent – financed by viewers – Against the Tide TV run by a New Covenant Church in Lublin, which has been called a “sect” by the government media for several years. In this case, the church brought a lawsuit against TVP.

“In my opinion, the reason why our television is discriminated against and persecuted by the Law and Justice government is that we present critical comments about the current government and its connections with the Roman Catholic Church in Poland. We also show that communist China entwines all environments in Poland with an increasingly dense net – even the police and border guards”, comments Pastor Paweł Chojecki, the editor-in-chief of Against the Tide TV.

The actions of the Against the Tide TV are so effective that the mouthpiece of the Communist Party of China – the Global Times daily – demanded that the Polish authorities silence the Against the Tide TV for the #SayYesToTaiwan #SayNoToCommunistChina campaign. The Embassy of the Republic of Poland in Beijing issued a statement on this matter in October 2018. 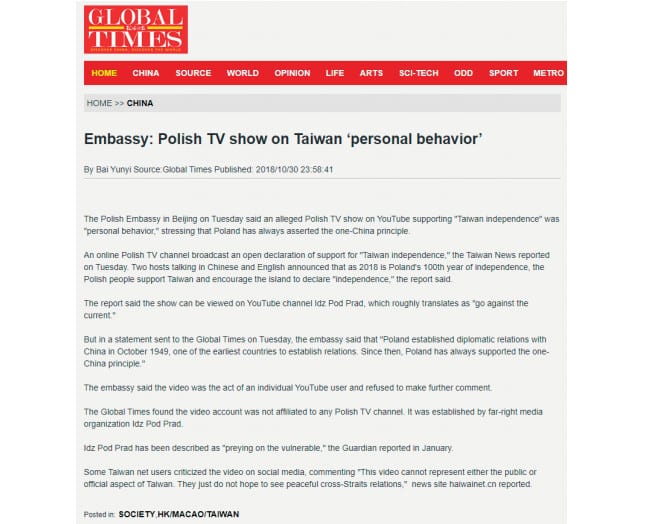 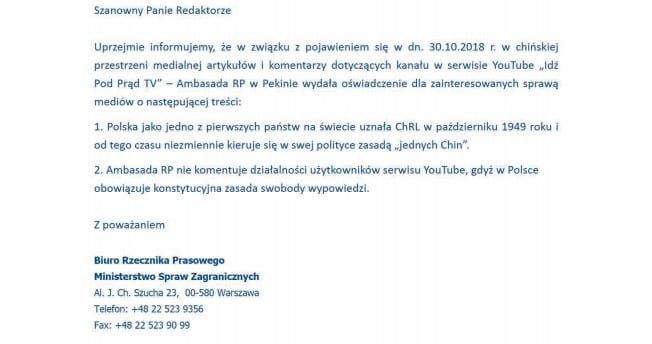 We would like to kindly inform you that in connection with the appearance on 30/10/2018 in the Chinese media space, articles, and comments about the Youtube channel Idź Pod Prąd TV (Eng. Against the Tide TV) – the Polish Embassy in Beijing has published an announcement for whom it may concern, which is as follows:
1. Poland was one of the countries which were the first to acknowledge PRC in October,
1949 and has been guided by the principle of “one China” ever since.
2. The Embassy of the Republic of Poland does not comment on the activities of Youtube users, for in Poland there is a constitutional principle of freedom of expression.

Sincerely,
Office of the Spokesperson,
Ministry of Foreign Affairs

In 2020, the report “Discrimination and persecution of evangelical Christians in Poland, based on the example of the New Covenant Church in Lublin and the Against the Tide TV” was published.

The document presents specific examples of the persecution and discrimination of Protestant Christians, including activities carried out by the Polish government, Polish services, and the judiciary. It describes, inter alia, the case of burning the car of Grzegorz Dolecki, a Christian from the Church of the New Covenant in Lublin, also associated with Against the Tide TV. The car burned down right next to a house where several small children were staying. The prosecutor’s office dismissed the case. The report was sent to the Polish authorities as well as to the US Department of State.

Examples of discrimination by state authorities include, for example, the Law and Justice government’s threefold refusal by the Ministry of Interior and Administration to conclude a separate agreement regulating relations between the New Covenant Church in Lublin and the Republic of Poland (two decisions in April 2020 and one in August 2020), although such a possibility is explicitly provided in art. 25 sec. 5 of the Constitution, which states: “Relations between the Republic of Poland and other churches and religious associations are determined by laws adopted on the basis of agreements concluded by the Council of Ministers with their respective representatives”. Such agreements have been signed by other churches of a similar nature, such as the Baptist Christian Church in Poland and the Pentecostal Church in Poland.

Another example of discrimination against Against the Tide TV and New Covenant Church in Lublin is the passivity of the prosecutor’s office and the police in the event of physical attacks against the editor-in-chief of the TV, pastor Paweł Chojecki, as well as television journalists and members of the Church. Reported cases concerned: car burning, car destruction, multiple unscrewing bolts in car wheels, puncturing inner tubes, fecal contamination of a building owned by the church. This passivity also consists in persistent disregard for criminal threats directed against members of the Editorial Board and the Church. A dozen or so such cases were discontinued by the prosecutor’s office, even despite the detection of the perpetrators.

The most recent example of a violation of fundamental civil liberties by the Law and Justice authorities is the indictment by the government prosecutor’s office and the conviction by the District Court of Pastor Paweł Chojecki, for, inter alia, criticizing President Andrzej Duda and the Catholic Church (eg for calling Duda “a coward”, and the Fatima revelations “a ghost”). The pastor was sentenced to 8 months of restriction of liberty in the form of forced community service and the payment of over 20,000 PLN of litigation costs. The judgment is not final. Three appeals have already been filed with the appellate court, as the legal community is outraged by the conviction of a pastor and a journalist for words. Paweł Chojecki is waiting for the appeal hearing.

However, the fight between Law and Justice government and the free media began much earlier. First, efforts were made to silence the smaller stations by probing whether the society and the journalistic community would express solidarity with the small media that were persecuted, and then cracked down on larger entities.

“This is not about our editor-in-chief or our television. It is about every Pole – not only colleagues of journalists. In the 21st century Poland, will we be able to look at the authorities, criticize them when it’s needed, and even ridicule them, show their hypocrisy – or will we go back to the People’s Republic of Poland and again welcome the Central Office of Press Control and censorship? In 21st century Poland, as members of minority denominations, will we have the right to believe what we want and discuss with other denominations, or will we go back to the Middle Ages and the state court will play a holy inquisition game, condemning those who dared to criticize dogmas, bishops, and popes? It is worth remembering that every dictatorship begins with a slow limitation of the freedom of an individual, inciting one another and discriminating first against minorities, only to subordinate everyone after some time, commented the journalists of the Against the Tide TV. “They came for us, they will come for you. Or they castrate you and then leave you alone. Do you want such a Poland?”, they add.