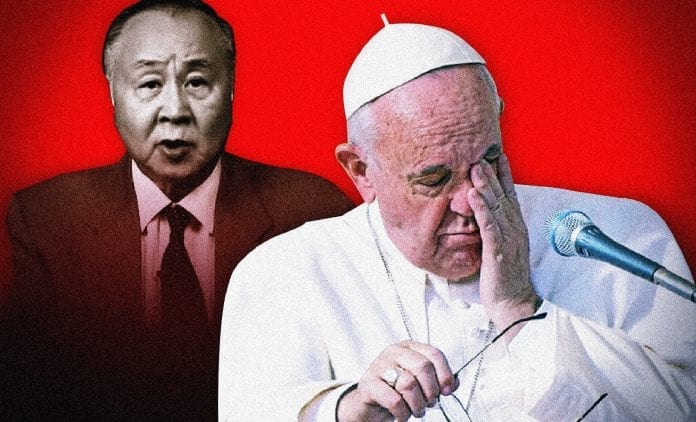 “This pope is a communist. The whole Vatican server, the internal communication, is installed by [the Chinese company] Huawei. They control the Vatican. They spend 2 billion dollars a year to bribe the Vatican people. […] That’s the secret agreement between the Vatican and the CCP. So that China makes a list of candidates of bishops or cardinals, and the pope only has the right to pick from that list. […] And also, since the CCP, through Huawei, controls the Vatican server, they know all the communications between priests. That’s why they have all those dirty pictures. As you know, we all know the problem.” – Elmer Yuen, a Hong Kong businessman who supports the pro-democratic protests in Hong Kong, in an interview for Against the Tide TV. Interview conducted by Eunika Chojecka.

“This pope is a communist. The whole Vatican server, the internal communication, is installed by [the Chinese company] Huawei. They control the Vatican. They spend 2 billion dollars a year to bribe the Vatican people. That’s the secret agreement between the Vatican and the CCP. China makes a list of bishops or cardinals candidates, and the pope only has the right to pick from that list. Do you know how serious that is? This kind of agreement; why secret? Because pope Francis knows they cannot expose it otherwise, the Catholics will be very angry with him.” – explained Elmer Yuen.

“And also, since the CCP, through Huawei, controls the Vatican server, they know all the communications between priests. That’s why they have all those dirty pictures. As you know, we all know the problem…” – he added.

When asked why, in his opinion, the Vatican and Pope Francis cooperate with communist China, Yuen responded: “Money, money, money. The Vatican has so many old guards. Those people are all paid off by 2 billion dollars a year. They bribe the Vatican people. It’s an open secret. You can look at the Bannon stuff [Steve Bannon – former Trump adviser and currently the host of the radio show War Room Pandemic]. There’s plenty of evidence. And everybody know it.”

Pastor Paweł Chojecki, editor-in-chief of Against the Tide TV, commented on the situation: “Since there are fewer and fewer Catholics and flow of income in the Catholic Church, this sum compensates for reputational damage, e.g. related to the pedophilia scandals.”

Yuen said that Pope Francis “never spoke one word sympathizing with Hong Kong. Never! Not one word. It’s very easy. Whoever sympathizes with Hong Kong, you can check, is not a communist. Whoever doesn’t speak a word about Hong Kong or this national security law, is being paid by the CCP.”

Pastor Chojecki commented on Yuen’s words: “Pope Francis intentionally omits to speak about Hong Kong. Communists have leverage over the pope and the Vatican. It’s not just about Francis’s favor towards communists – he once confessed in an interview that as a young priest, he met a young communist woman in Argentina who taught him how to understand the world, have a soft spot for communism, love communist China. To this day, he mentions that his contact with this Argentinian communist shaped his worldview. When accused of being a communist, he replies They say I’m a communist, but after all, the first Christians were communists.  Francis draws upon communist propaganda, which tries to portray Christianity as a prototype of communism.”

He added: “Besides bribes, there’s another factor. If the Vatican were to get into the communists’ black books, all of those dirty pictures of the Catholic Church’s hierarchs would come out. Furthermore, Fr. Isakowicz-Zaleski revealed that he has evidence of dirty deeds of the so-called Lavender Mafia. It turns out that the Lavender Mafia was communist China’s tool in the Vatican. Those clerics, under the pressure of Chinese communists, caused the conservative Pope Benedict XVI to abdicate.”

Elmer Yuen recently met with many members of Congress in Washington, explaining how important the Free World’s fight for a democratic Hong Kong is. While on Against the Tide TV, he also encouraged Poles to help Hong Kong.

Against the Tide TV’s editor-in-chief gaged the possible effects of the China-Vatican relations: “Chinese communists will build concentration camps for us, or we’ll be chipped puppets in the hands of the Chinese (electronic control outside the camps), or those who won’t agree to the Chinese tools for control (probably by the means of Huawei) will be sent to concentration camps. That’s the Sino-Vatican plan for the world today.”

The Supreme Court DID NOT AGREE TO EXTRADITE Falun Gong activist to Communist China! But the battle is not over!

How can Americans regain their homeland? What’s going to happen after the storming of Capitol?

Scandal! Falun Gong activist sharing cell with a man accused of spying for China in Poland!

Polish court permits the deportation of a Falun Gong activist to China! What will Poland’s Minister of Justice Ziobro do?

QUARANTINE WITH THE BIBLE