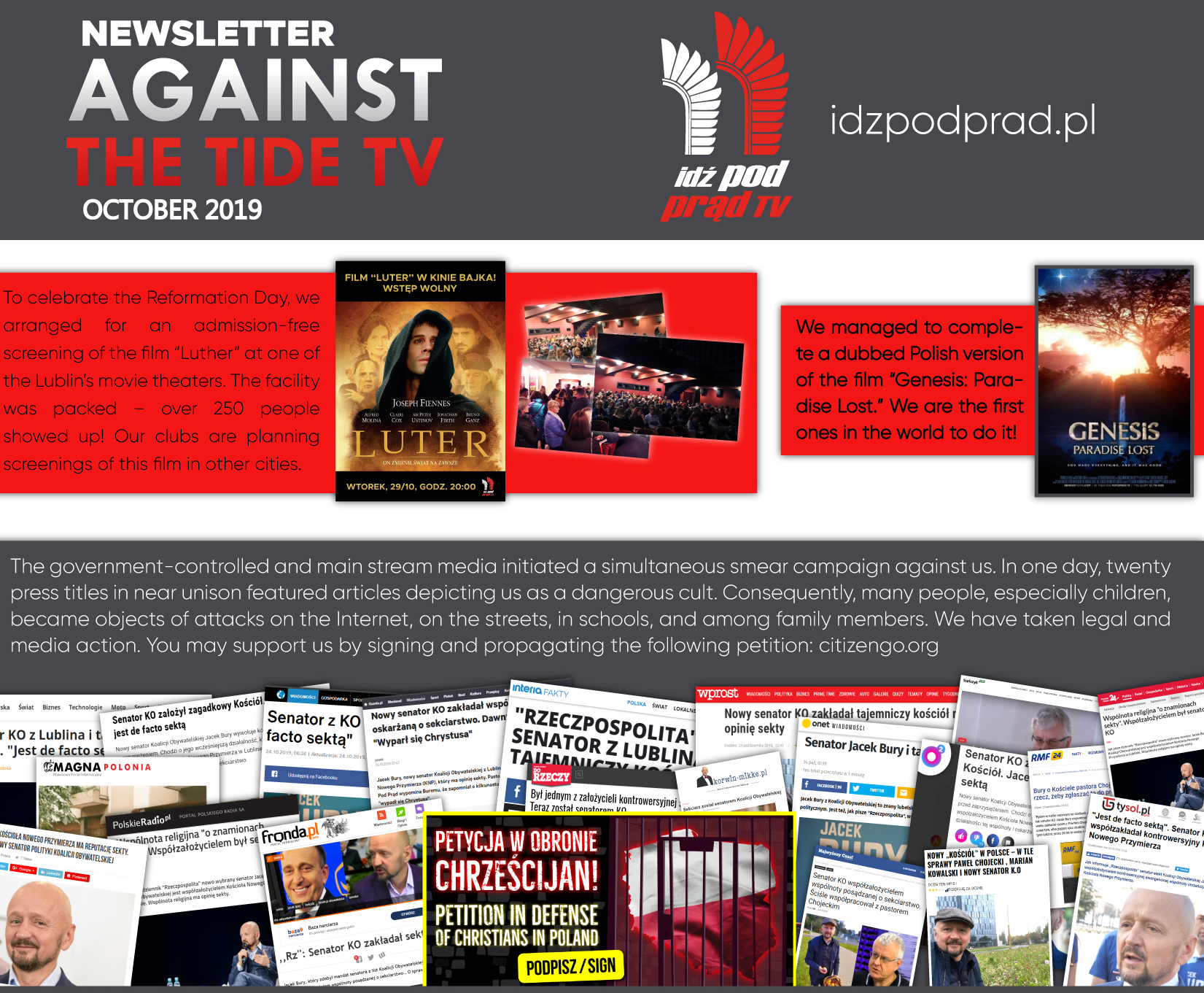 To celebrate the Reformation Day, we arranged for an admission-free screening of the film “Luther” at one of the Lublin’s movie theaters. The facility was packed – over 250 people showed up! Our clubs are planning screenings of this film in other cities.

The government-controlled and main stream media initiated a simultaneous smear campaign against us. In one day, twenty press titles in near unison featured articles depicting us as a dangerous cult. Consequently, many people, especially children, became objects of attacks on the Internet, on the streets, in schools, and among family members. We have taken legal and media action. You may support us by signing and propagating the following petition.

We managed to complete a dubbed Polish version of the film “Genesis: Paradise Lost.” We are the first ones in the world to do it!

We developed a video material promoting the “Christian University” project among Christians in Poland. We have already received promising initial feedback.

A delegation from our television visited the United States again. They participated in the Pulaski Day Parade in New York City. We had a wonderful time of fellowship with Polish friends living on the East Coast, as well as in Chicago and Canada.

Last month, we had two opportunities to interview Gen. Robert Spalding, former advisor to President Donald Trump. The occasion was the publishing of the Polish edition of his book, “Stealth War.” Also, we met him in person during European Cybersecurity Forum – CYBERSEC 2019 in Katowice, Poland.

A parliamentary election took place in Poland. The Catholic-conservative ruling party won the Sejm (lower house), but they lost the Senate (upper house). During the election campaign, the leader of the party, Jarosław Kaczyński, uttered the following slogans: “The (Catholic) Church has been and is a herald and keeper of one and only – commonly known in Poland – system of values” and “Every decent Pole must know what the role of the Church is and that apart from it – once again – there is only nihilism.” Immediately after that, the government television began a coordinated attack against our church. The ruling party, Law and Justice, is in fact a post-communist party that is raising taxes and enhancing socialism. It does not comprehend the republican freedoms of religion, worldview, speech, and media. In the near future, it is planning to subject Polish journalists to regulation by special authority.