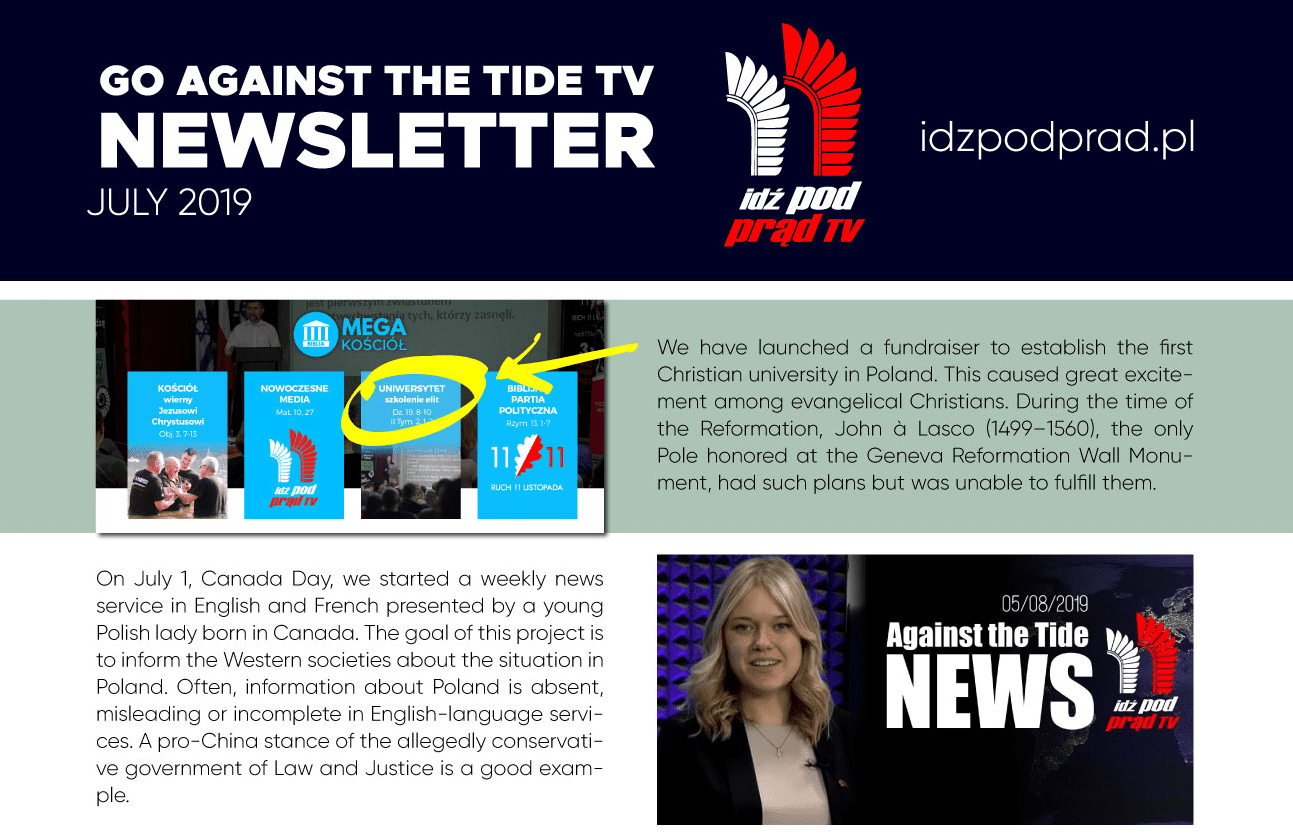 We have launched a fundraiser to establish the first Christian university in Poland. This caused great excitement among evangelical Christians. During the time of the Reformation, John à Lasco (1499–1560), the only Pole honored at the Geneva Reformation Wall Monument, had such plans but was unable to fulfill them.

On July 1, Canada Day, we started a weekly news service in English and French presented by a young Polish lady born in Canada. The goal of this project is to inform the Western societies about the situation in Poland. Often, information about Poland is absent, misleading or incomplete in English-language services. A pro-China stance of the allegedly conservative government of Law and Justice is a good example.

On the Independence Day in the United States, July 4, we recorded special greetings for Americans. They have reached the White House. See the clip with English captions.

During their vacations a number of teenage apprentices joined our editorial team. It resulted in new media productions, such as this moving clip commemorating the resistance fighters of the Warsaw Uprising.

With their help we started IPP KIDS, a program for children both in Poland and among Polish diaspora around the world. The participants honored the memory of the resistance fighters of Warsaw with art works.

Throughout July, we were faithfully supporting the Hong Kong protesters and those persecuted for their faith in Christ in China. We recorded a few interviews with Chapman Chen, Hong Kong journalist, and Pastor Bob Kraft. The latter gave an amazing testimony of how important our help for Hong Kong in the form of the #FreeHongKong campaign is.

On July 21, we got involved in the international protest #StandWithUighurs #WhiteBlue19, to stand up for the persecuted Uighurs. According to the UN estimates there are as many as 3 million Uighurs imprisoned in concentration camps in communist China.

The London Club of our TV did an interview with Jack Fairweather, a Briton and author of the book “The Volunteer” about Captain Witold Pilecki, who voluntarily went to the Auschwitz concentration camp, where he organized a resistance movement. See the interview in Polish and English versions.

This month, we stepped up our collaboration with the John Birch Society and Prager University. Two interviews with Dennis Prager as well as lectures by Art Thompson (part 1 and part 2) and Martin Ohlson of the JBS are available on our channel.

Also on our channel you may find a video report of the Fifth Annual Conference of the Go Against the Tide Clubs titled “Choose Freedom!” with English captions.

Also, we were able to talk with Andrew Tucker,  legal counsel to the European Coalition for Israel, about the reasons why it is important to support Israel and how to solve the conflict with the Palestinians.