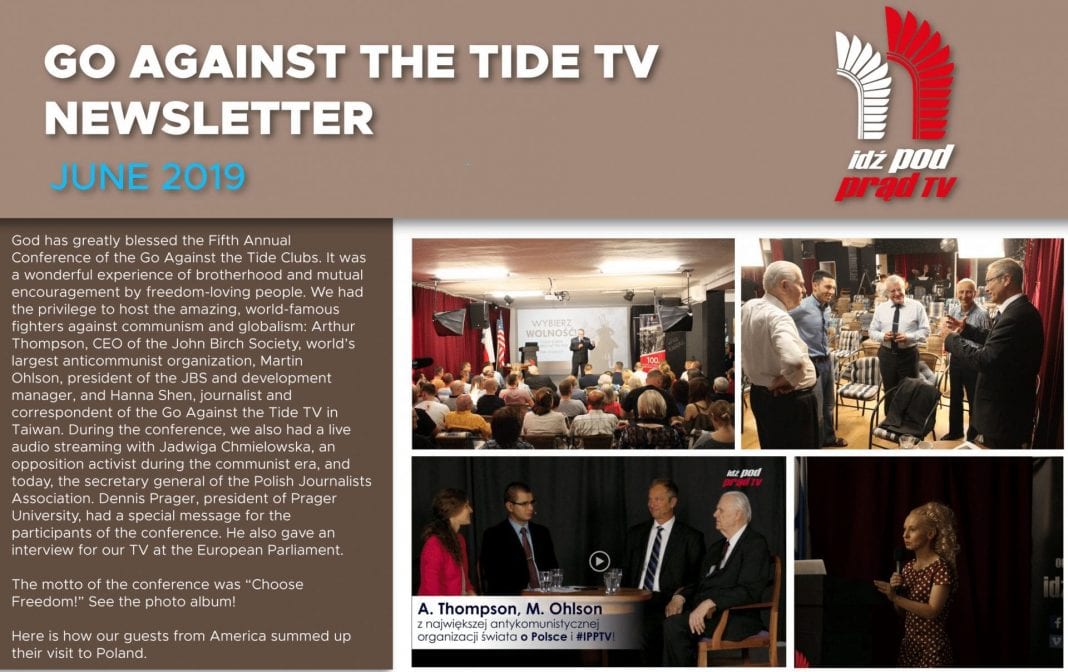 God has greatly blessed the Fifth Annual Conference of the Go Against the Tide Clubs. It was a wonderful experience of brotherhood and mutual encouragement by freedom-loving people. We had the privilege to host the amazing, world-famous fighters against communism and globalism: Arthur Thompson, CEO of the John Birch Society, world’s largest anticommunist organization, Martin Ohlson, president of the JBS and development manager, and Hanna Shen, journalist and correspondent of the Go Against the Tide TV in Taiwan. During the conference, we also had a live audio streaming with Jadwiga Chmielowska, an opposition activist during the communist era, and today, the secretary general of the Polish Journalists Association. Dennis Prager, president of Prager University, had a special message for the participants of the conference. He also gave an interview for our TV at the European Parliament.

The motto of the conference was “Choose Freedom!” See the photo album!

Here is how our guests from America summed up their visit to Poland.

The second screening of the movie, “Letter from Masanjia” (Leon Lee), in Poland took place during the conference. It tells the story of a man, who was imprisoned and brutally tortured in communist China, yet he did not give up his dream of freedom. Screenings of the documentary are being held all over Poland by the Go Against the Tide TV clubs.
Recently, Hanna Shen appeared in the main programs on Polish Television and Polish Radio. Also, Andrzej Turczyn, attorney, vice-president of the November 11 Movement, and commentator on the Go Against the Tide TV, was quoted in the mainstream media in connection with his campaign, “Guns Save Lives,” including quotes from President Donald Trump.

Our clip, # FreeHongKong has already reached Asia. The largest media corporations in Hong Kong thanked us for the support in their fight for freedom. American pastor, Bob Kraft, who lives in Hong Kong also thanked us for promoting the campaign. #FreeHongKong is now the primary motto of the protesters! Our club members also joined a demonstration by citizens of Hong Kong that took place in Warsaw. Posters created by a graphic designer who works with us became very popular.

On the 30th anniversary of the Tiananmen Square massacre we were the only ones to demonstrate in front of the embassy of communist China in Warsaw, the consulate in Gdańsk, and Tiananmen victims’ monument in Wrocław. Also, our clubs in Chicago and London were involved in the commemoration of the anniversary.

Also in June, we gave support to the pursuit of freedom by Georgians, who oppose the occupation of 20% of their territory by Russia and their political life being dominated by Russian undercover agents. We have initiated the action, #FreeGeorgia #RussiaGoHome, on social media.

The sovereignty of Poland has been seriously jeopardized by the European Court of Justice that denied us the right to determine the retirement age of our judges. Consequently, we initiated a discussion about Poland’s exit from the European Union, #PolExit.

Since the summer vacation began we have a few new volunteers working at our studio. They started a series of programs for the youth. The Freedom Project Academy sharing their animations about Polish heroes is a great encouragement for us. Thanks to the courtesy of Dr. Duke Pesta, we published a video-clip about King John III Sobieski with Polish dubbing.

Małgorzata Kubicka and Kornelia Chojecka of our editorial team had a presentation at the best high school in Lublin on education in the USA. In particular, they emphasized Liberty University, where Kornelia gave a lecture last fall. The students responded with deep interest!

Another musical talent joined our team. Wasces returned to rap after fifteen years. He could not keep quiet about pedophilia in the Catholic Church and the hypocrisy of bishops covering up these crimes. His rap has already been viewed by tens of thousands of users.

Małgorzata Gazda, member of our editorial team, has concluded her doctoral dissertation. Her capstone project was a book titled, “A Controversy About the ‘Signature in the Cell.’” It was issued as a scientific book in the Library of Philosophical Aspects of Genesis at the University of Zielona Góra.