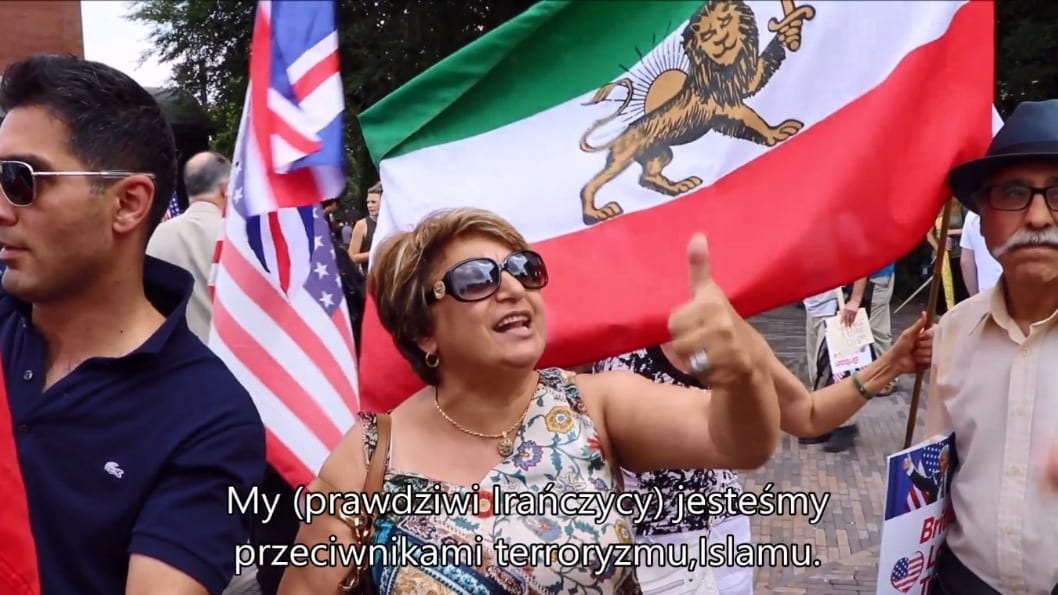 “They took me into prison for 3.5 years, they beat me so badly that I had stomach bleeding for years. They tortured my mom, they tortured my sister. They said they wanted to go and kidnap my sister in London and bring her to the Iranian prison, beside my cell room and rape her in front of my eyes. I know that they raped some of my church members, who got pregnant later,” says a former member of Hezbollah, a descendant of Mohammed, now a Christian pastor, Saeed Abedini from Iran in a conversation with the Go Against the Tide TV. He adds: “95% of Iranians are against the current Islamic regime. Those who support the Islamic Republic of Iran betray the Iranian people! We will not forget it!”

While Witold Gadowski, Grzegorz Braun, Robert Winnicki and Janusz Korwin-Mikke recommend to the Polish people contacts with the Islamic Republic of Iran, where conversion to Christianity and preaching the gospel are punished with death, and while Pope Francis calls Muslims “our brothers”, we asked the Iranians who managed to escape the totalitarian state, what they think about the Islamic regime in Iran. You will be surprised by what they said!

“We do not need the Islamic Republic in Iran. We have been in Islamic captivity for 40 years! Islam has nothing to do with democracy. In my country, if you drink alcohol, you will receive 80 lashes for punishment. If a woman removes the headscarf, she can even be killed or sent to prison for 10 years. And they rape the prisoners. It is normal in Islam. Islam teaches that if you take a woman into slavery, you can rape her. When I was in prison, I was raped…”– Iranian women told our reporter Piotr Kamieniak, who lives in London and came to the rally of President Donald Trump.

“What would you like Trump to do for Iran?” our reporter asks a senior Iranian. “I would like him to stop relations with Iran and help the Iranians overthrow the regime because Europeans – British, French or Germans – do not care about Iran’s fate! Trump is the only man who definitely says: Enough! Enough with the trade with the Ayatollahs! Ayatollahs are a threat to today’s world. Finally, we found someone who speaks our language!”

The people of Iran are brutally persecuted by their government. In 2018 alone, the regime arrested and sent to prison over 7,000 protesters. Thousands were beaten, flogged and tortured. Last year, at least 26 protesters were killed by Islamic authorities.

In an interview for Go Against the Tide, Pastor Saeed Abedini, an Iranian, member of Hezzbolah and a descendant of Mohammed who converted to Jesus Christ and was thrown into jail, exposes the Islamic regime of Iran: “The Iranian government has two faces. One shows in Europe, they say: we have freedom, we are working, we fight against terrorism, we are good people, they are trying to be modernized. But this is a big lie. My life is a testimony. It shows that they took me into prison for 3,5 years, they beat me so badly that I had stomach bleeding for years. They tortured my mom, they tortured my sister. They said they wanted to go and kidnap my sister in London and bring her to an Iranian prison, beside my cell room and rape her in front of my eyes. These are the things that I heard. I know that they raped some of my church members, who got pregnant later.” Pastor Abedini was released in January 2016, along with two Americans.

In a conversation with Pastor Pawel Chojecki and Kornelia Chojecka, Pastor Abedini also praises President Trump for what he does to the Iranian authorities.

Pastor Abedini made a speech at Liberty University, the largest Christian university in the world.

Pastor Chojecki in yesterday’s program “Idź Pod Prąd NA ŻYWO” (“Go Against the Tide LIVE”) referred to the activity of Pope Francis in the field of cooperation with Islam: “Pope Francis, together with the Ayatollahs today, curses Donald Trump, saying that he is the one who wants the arms race, the one who wants to arm the borders, the one who wants to build walls. And the solution is to be sheltered in some Muslim ark of brotherhood… But all the people persecuted all over the world say the name: „Donald Trump”, hoping that he will be able to change their fate, although our hope, of course, is in God.

The appeal of a young Iranian woman to Poles

Saeed’s sister, Zibanda, when she converted to Christianity, had to go to Great Britain and when her brother was in prison she fled from Iran, whose authorities wanted to kidnap her and put her in an Iranian prison. She found shelter in the United States.

Zibanda as a Muslim girl in Iran

“I want to give this one message back to your people in Poland. This is a lie that they cannot believe that. I, as an Iranian citizen, have never experienced that human rights are my rights in my daily life. When I converted to Christianity, I had to leave my country. The Islamic government in Iran has all the power in their hands, has all the media in their hands, they can just say what they want to just brainwash people. This is what we’ve dealt with for 40 years, from when the Iranian Islamic revolution happened in 1979. (…) That’s why I am asking for the Polish people not to just let the Islamic country deceive them. They are not what they show on social media, on TV and the news. The truth is completely different. Women suffer in Iran, Christians suffer in Iran. Many Christians are in prisons and are waiting for their trials. And now Iran wants to do the same with neighboring countries. They say: we have a great culture. No, that’s not true. Persian culture is not Islamic culture. We must separate them completely. As we know from history, Islam conquered Persia! (…) Most of our journalists are in prisons because they have no right to write about problems in Iran. Most of our attorneys and lawyers are in prisons because they choose to defend their clients. (…) I would love Polish people to support the Iranians and their rights, and to stand up for their freedom, which they desire so much,” Zibanda said in an interview with Go Against the Tide TV. (Soon THE ENTIRE interview on our YouTube channel.)

Next week in Warsaw, an international Polish-American conference on the Middle East will take place. One of the main topics is to be Iran. In response to this event, false bomb scares occurred in many Polish cities as a punishment „for the betrayal of brothers from the Islamic Republic of Iran.” The Foreign Minister of Iran says that Poland “will not wash away this shame.” There was also a sudden pro-Islamic mobilization of pro-Russian and pro-China forces in Poland.

Until recently, those forces participated in the demonstrations „Stop Islamizing Europe.” Now, they have changed their minds. The leaders of the parties: “Wolność” („Freedom” – Janusz Korwin-Mikke), “Ruch Narodowy” („National Movement” – Robert Winnicki) and “Pobudka” („Reveille” – Grzegorz Braun) have recently spoken in favor of the totalitarian regime of the Islamic Republic of Iran. At a joint conference in the Sejm, their politicians expressed their opposition to the conference, organized in Poland along with the US, with the Middle East as the topic. They stated that it had been meant to „draw Poland into the Middle East war,” and was part of the propaganda war against Iran.

Let’s recall that a year ago Robert Winnicki was at the celebration of the 39th anniversary of the revolution. The celebration took place in the Iranian embassy in Warsaw and Winnicki was there with the deputy head of the Ministry of Foreign Affairs Jan Dziedziczak from PiS (Law and Justice) and with Janusz Korwin-Mikke.

On the other hand, the National Movement of Upper Silesia posted a Twitter message in which, on behalf of Polish citizens, it apologized to Iran for the conference on the Middle East. The tweet, oddly enough, disappeared from the nationalists’ profile after we responded to this pro-Islamic propaganda: 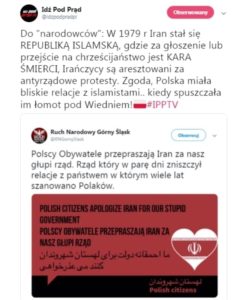 To the “nationalists”: In 1979, Iran became the Islamic republic, where the punishment for the preaching or conversion to Christianity is the death penalty, Iranians are arrested for anti-government protests. Agreed, Poland had a close relationship with Islamists … when she gave them a good trouncing in Vienna!

Facts about the Islamic Republic of Iran

This pro-Islamic propaganda performed by, unfortunately, Polish politicians and journalists, has nothing to do with reality. What does today’s Iran look like? 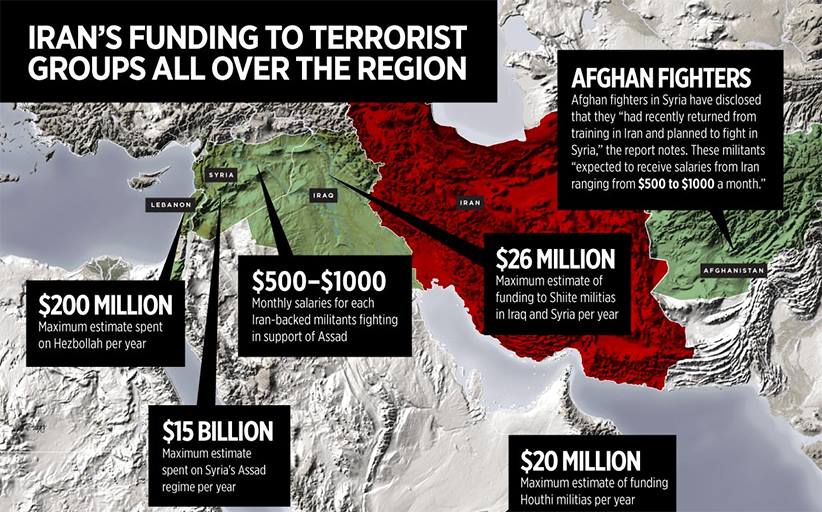 This month marks the 40th anniversary of the outbreak of the Islamic revolution in Iran. In 1979, Ayatollah Khomeini transformed Iran from a constitutional monarchy into an Islamic republic. Khomeini promised to improve the lives of ordinary Iranians. Meanwhile, in 2017, as estimated by the International Labor Organization, unemployment among young people in Iran amounted to 29.94%! In 1979, the exchange rate was 7 tomans for one dollar. Today, this rate is 12,500 tomans per dollar! Khomeini promised that his regime would not build political prisons. This also turned out to be a lie, Iran is currently holding at least 900 political prisoners in its prisons. Khomeini promised freedom of speech and freedom of the press. The media environment in Iran is one of the most repressive in the world. Every year dozens of journalists are harassed, intimidated and arrested. After the 1979’s revolution, Iran also became a leader among the countries that sponsored terrorism.

THE ENTIRE interview with Pastor Saeed Abedini exclusively for the Go Against the Tide TV: