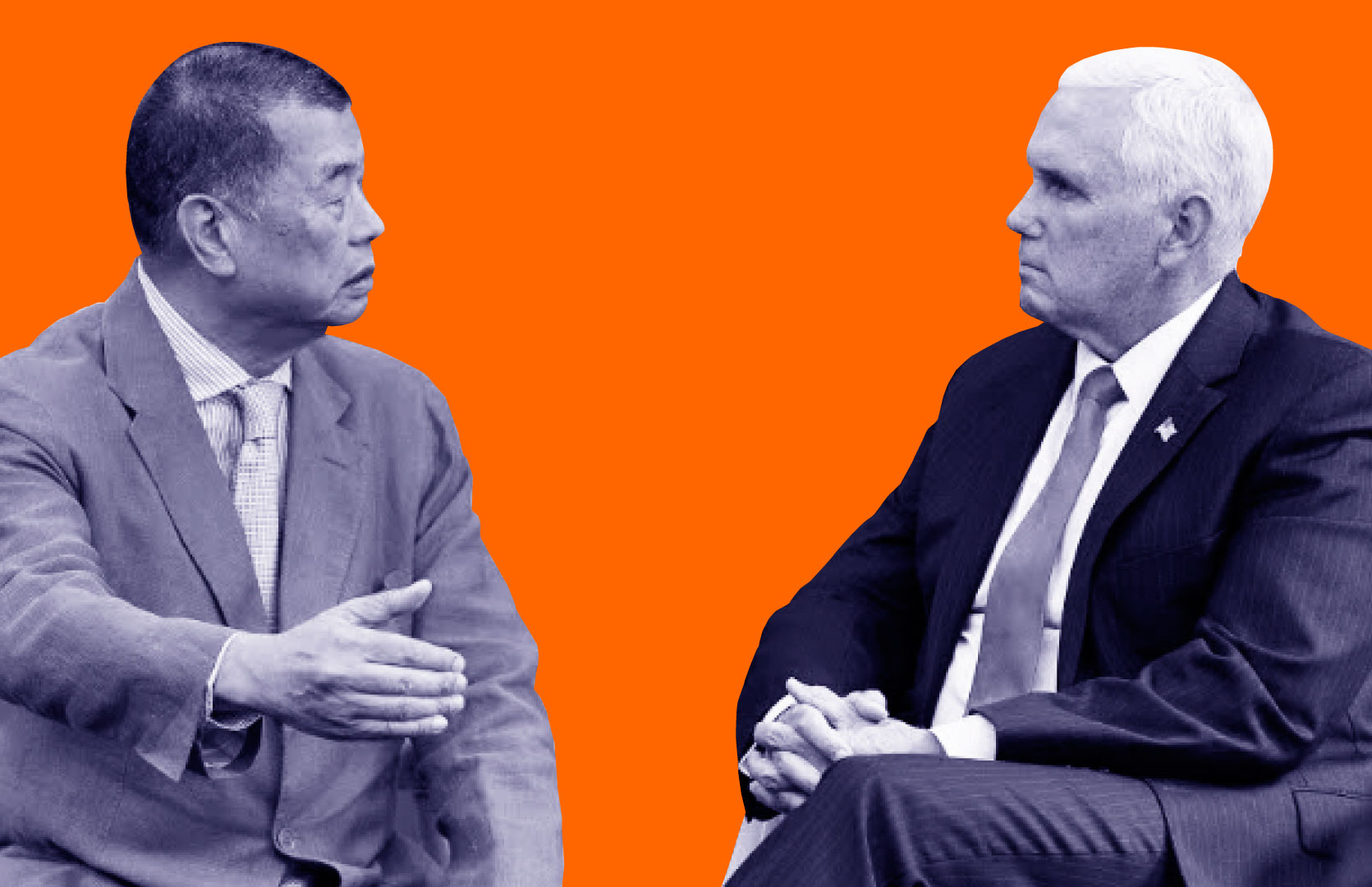 He’s been in the crosshairs of the Chinese Communist Party for years. Arrested in April for taking part in the Hong Kong protests back in 2019. He was released on bail but is accused of being an instigator of pro-democratic protests. Last year, he went to the US to meet with Vice President Mike Pence and Secretary of State Mike Pompeo to discuss the extradition law Beijing wanted to implement against Hongkongers’ will. Today, he sounds the alarm concerning the new national security law, which China wishes to impose on Hong Kong. Jimmy Lai – a multimillionaire, media tycoon and founder of Apple Daily, Hong Kong’s largest newspaper – speaks with editor Eunika Chojecka in an exclusive interview for Against the Tide TV.

First of all, I want to say that we are praying for Hong Kong to be strong and free. And we are covering the situation in Hong Kong thanks to our Taiwan-based correspondent, Hanna Shen. I want to ask you about your situation. You were arrested in April over protests back in 2019. Why is the Chinese Communist Party so afraid of you and “Apple Daily”?

Well, I think it’s because I’ve been very vocal and you can say that I’m one of the trouble makers, so they’ve focused on me. Also, we have the biggest newspaper or media [in Hong Kong], which is also an opposition media. We’ve always been supporting the democratic movement, especially the recent resistance movement against the extradition law. Now, when the national security law came, we became more vocal against it, and that’s why we became the focus of their attack.

What does the new national security law mean for Hong Kong, Hongkongers, and free media such as “Apple Daily”?

I think that the national security law is the last nail in the coffin for Hong Kong because it supersedes our rule of law and also our legislative council. It’s imposed on us with no respect of the law, of the rule of law in Hong Kong. Without the rule of law, our financial status will be destroyed. Without the protection of the law, nobody can do business here except those who have protection by officials who have power over them. That means that Hong Kong will have to be the same as China, that it will pay protection money to officials to protect us. Besides, without the rule of law, there is no longer any mutual trust in the financial business, [where transactions] of billions of dollars take place in seconds. Without this mutual trust, due to the lack of the rule of law, the financial business here will definitely be destroyed. That’s why Hong Kong, as we know now, will be finished.

In your opinion, will Hong Kong become a second Tibet?

I don’t know if we will become the second Tibet. We may become anything. We may even become Xi Jiang. The whole place could become a concentration camp.

But I don’t think that will happen, because now, the national security law unprecedentedly united all the countries of the Free World against [China]. So, I think we still have hope that [China] will tone down [their stance].

And also, the most powerful refute came from England. The British government is prepared to give nearly 3 million British National Overseas holders, including their families, the British right of abode, which is a great encouragement for our people. If they continue to fight and see that there’s no way that we can win or if they’re totally disappointed by the future of Hong Kong, they can at least go to England. So, if all the professionals, especially the financial professionals and entrepreneurs here, leave Hong Kong to go to England, Hong Kong will be a dead place. Without them, Hong Kong can’t be a financial or trade center anymore. This also fits into the situation in England after Brexit. Many professionals and entrepreneurs that are not English are leaving England. [Those from] Hong Kong can fill in this vacuum. This works for good for both Hong Kong and England. So, I think this is a very good measure the British are offering us.

What are your thoughts on the response of President Donald Trump’s administration to this national security law?

Well, we don’t know yet what kind of measures [they’ll take]. Hong Kong’s special status will definitely be revoked. But whether there will be other sanctions against China, we don’t know. But I think there will be some sanctions. The most important thing is that America is taking the lead in censoring the CCP. We also have support from countries from the Free World, [who are] united against China imposing this national security law on us, which is unprecedented. It’s wonderful. And that’s why we’re not totally desperate. We still have hope that this national security law may be watered down or may be delayed.

And what is your opinion about the European Union’s response to the law? Josep Borrell, High Representative of the EU, said that the EU is concerned and will be reaching out to Beijing.

Well, as I said, the Free World is united and on our side. And most importantly, this time, they’re not just voicing out, but they’re also acting out with actual sanctions, which is very important because actions are louder than words.

The problem is that the CCP tries to convince the world that Hongkongers should just make money, then they’ll have a good life and that they shouldn’t think about politics. Isn’t that enough for you?

.@JimmyLaiApple 1st Polish media interview @appledaily_hk @AgainstTideTV @EunikaChojecka "We need a rule of law and freedom! We are not animals. We have values, we have a spirit WATCH FULL https://t.co/aly4L8ooR7 ✝️🗽Where the spirit of the LORD is there is Liberty" – 2 Cor 3:17 pic.twitter.com/1EO322456d

You once said that Hongkongers are fighting for the soul. What did you mean by that?

Our soul is our need for freedom, our need for morals, the values we rely on to live a harmonious life, the mutual respect that we have for each other because we share the same values, the same morals and the same convictions of freedom as protected by the law.

Polish people may wonder why they should pay attention to what’s going on in Hong Kong. I want to ask you, in what way, what the CCP is doing in Hong Kong is important to Poles, Americans, Czechs or, for example, Italians?

Well, Hong Kong shares the same values with the free world, especially with America and the EU, because of the legacy of our past colonial times. So, we naturally became the bridgehead of the Western values inside of China. We are very important because we can spread our values in China to change the people’s values, to change the CCP’s behavior in dealing with the outside world. That means that we can help with world peace.  China is definitely going to be the biggest economy in the future. If we allow China to deal with the world according to the old values, the world will not have peace. And since we share the same values, we are almost like [West] Berlin in the Cold War with the Soviet Union. If Hong Kong falls, so will Taiwan, so will the American hegemony in Asia. So, we mean a lot to the Western world, especially to America. By protecting us, you protect the values that we uphold, which are the Western values.

Well, I think you can join the EU and together, do something to support us. We need all the help [we can get].

We will do that. Our media is passing on this information from you to our government, and we are praying for you. Please pass this message to Hongkongers that you are an example to the Free World of bravery and perseverance in the fight for freedom.

When we, as evangelical Christians, heard you signing Sing Hallelujah to the Lord during protests, we realized that Chinese communists can’t take your liberty away because you have it in your hearts.

Yes, we have the Lord in our hearts. If the Polish people support us, the [Polish] government will support us [as well]. In a democracy, the people’s wishes become the politics of the government. And we wish that all of this will become a reality.

And please pass on our best wishes to Hongkongers. And I’ll quote the Bible: where the Spirit of the Lord is, there is liberty (2 Corinthians 3:17).

Thank you. Keep us in your prayers.