Home China This is a war. China is worse than Soviet Russia. Boycott and... 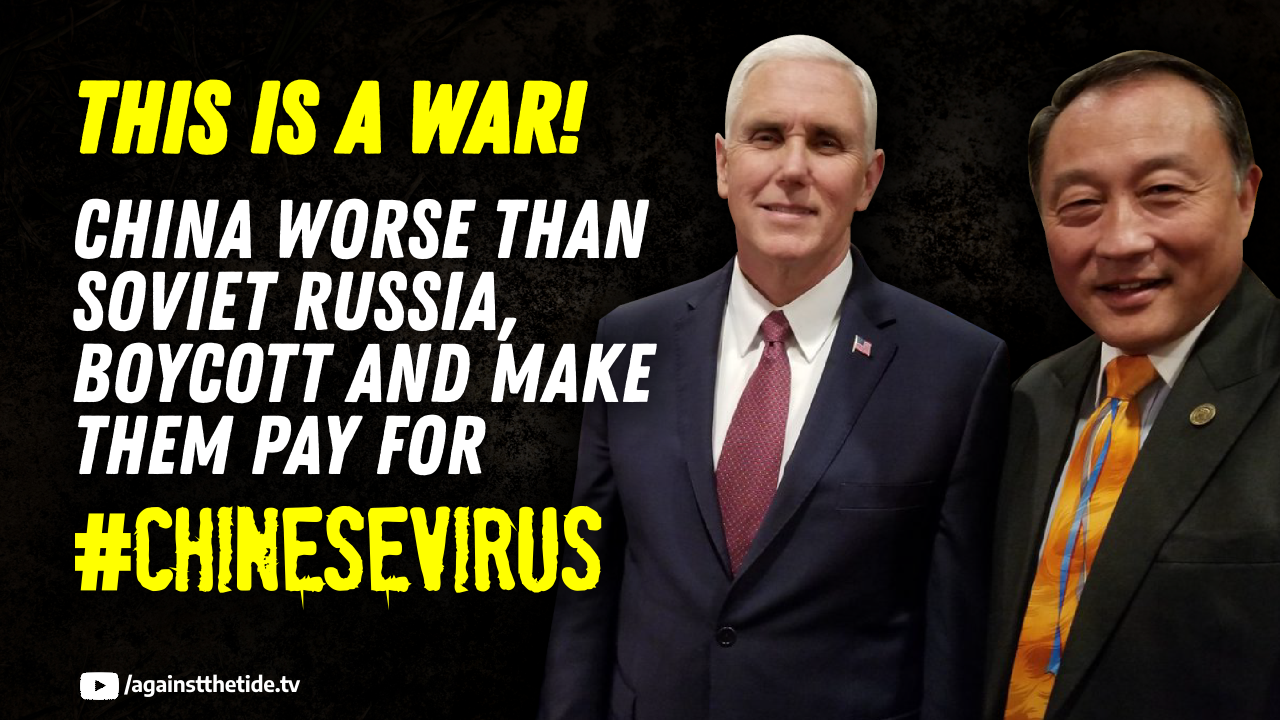 Solomon commented on our petition to President Trump to Hold the CCP accountable. “This petition is so important because it’s the first step for war damage claims. This is a war and, for the first time, it has killed many, many citizens outside of China. During the Cultural Revolution and during other Chinese regime massacres, they’ve killed the Chinese inside of China.

Now, they’re killing foreigners outside of China. Of course, they’re doing damage to our economy – the kind of stuff you can only do during wartime. But guess what there are no bombs, there are no bullets. There’s a virus. And they’re lying about the virus and are covering up information about it.”

Solomon highlighted that the CCP has been preparing for this pandemic for a very long time. “It goes all the way back to September 18. They did a drill, a Coronavirus emergency response drill in Wuhan. And the military participated” said Solomon. “My question always was: what do they know that we don’t know? Why was it as early as September 18, 2019? That’s why I thank you for your leadership in launching this petition. The world needs to unite and ask for war damage reparations from China.”

So evil! And he admitted the purpose of releasing #COVID19 #CCPVirus: we can catch up with the #US ahead of time, we can force the #US to die.@realDonaldTrump @SecPompeo: this evil person is a visiting scholar in the US. See his bio in the thread. pic.twitter.com/t9D7tsUYHX

Solomon thinks it is possible that the US intelligence agencies withheld crucial information from the president. “There is concern about our own intelligence service and community and the deep state. In fact, they’re more interested in taking down Trump, through the Russian conspiracy and through impeachment. Meanwhile, America is not protected.”

Solomon thinks that internal pressure between the CCP and people in China is spelling a possible collapse of the regime. “Actually, I saw something very interesting today. I think China is facing internal problems. The kind of problems, I actually tweeted (about) this morning: ‘I came too late. I feel guilty. I couldn’t do anything to help my parents. Meanwhile, they got quarantined, locked up, and murdered by the virus. And the government is responsible for murdering them’ In the Chinese culture, this kind of guilt and shame is psychologically very, very powerful. This will enable their own citizens to want to question the government.”

“As a matter of fact, the government cannot even get people to come out and to go to work, because they know that the government lies. That’s the kind of stuff you’re going to see – internal pressure. That’s going to lead to mass unemployment. People won’t find a job or get fired. And that, on top of the shame and anger we’re talking about, is based on Chinese culture. If you can’t protect your own parents, if can’t do anything for your parents, or save your parents, it’s such a shame.”

Solomon sees an anti-CCP sentiment growing globally and hopes that people around the world will unite against this evil.

“To understand the reason this is happening, you have to put all this kind of stuff in the perspective of the Chinese culture. If you can’t help to save your own parents, it’s definitely a sin. And this going to have psychological, long-lasting damage for China”, he added.

Freezing off CCP assets in USA and holding off debt payments are not the only way to hold them accountable. “You’re right about our national debt to China. Also, that brings us back [to the fact that the] Qing dynasty actually owes U.S. government money. That’s still China. They claim they’ve been united for 2000 years. Then, pay up!” says Solomon “All those things are going to be open and we are going to figure this one out. But accountability foremost. And the damage claims later.”

Poland’s President Andrzej Duda and current (Law and Justice) administration have been praising the CCP for the way they have handled this pandemic.

“I’m sorry to see that happening, but I’m not surprised, because the CCP has been buying friends everywhere. And guess what! That’s going to go away too. They trap people, or nations, with their Belt and Road projects. And now, those nations can’t pay. Guess which bandwagon they’re going to join. They will join our bandwagon and ask for war reparations”, says Solomon. ” So, I am very, very hopeful. Those guys will all change their minds. Today, they might seem to praise Xi Jinping, but people like you in Poland will stand up.”

Solomon warned against CCP’s PR damage control efforts by offering help. “I posted a video clip yesterday on Twitter of a Chinese worker in a Chinese factory making masks and using those masks to clean his shoes. Can you imagine? Those masks will be sold worldwide. So first, they came at us with this coronavirus. Then, they tried to profit from the export of those masks. Those masks will make us sick, if not kill us. They might even kill us!”

Chinese factory worker runs his shoes on the masks asking the camera man if this is good enough. Are these the masks for export??? Can we trust China to do the west’s manufacturing? pic.twitter.com/ZFZHILZacj

“So, the problem is that if any government official, no matter from which country, unknowingly brings those masks and medical supplies in, and people get killed or get infected, what will the response be? Your people will rise up and take them out in the election year. That’s the beauty of democracy. We have our recourse to hold our elected officials accountable for this kind of stuff.”

Solomon thinks the CCP is the new Empire of Evil. “Most people don’t realize what we’re facing, especially all the killing that’s been done within China for the last, I don’t know, 70 years, all the way up to Tiananmen Square. The body count is at 78 million Chinese.” says Solomon. “Now suddenly, we wake up. Now, non-Chinese, people who have nothing to do with China, are being killed by this virus. Our economy got ruined by this virus. And they’re still denying it, still lying, still covering it up.”

“So now, the threat is outside of China and directed at peaceful and innocent people. And when that happens, you say ‘Oh my God, this is worse than the Soviets’. When Ronald Reagan brought down the first Evil Empire, he was aware of the threat. This threat, which is this new Evil Empire, will try to harm you, try to kill you in order to bankrupt your economy for world domination. Freedom-loving people realize this. Guess what they’re going to do. They’re going to stand up. They’re going to demand our governments to take on this Evil Empire and defeat it.”

Solomon says his faith helped him get through the persecution of the CCP. “Christians get what is right and what is wrong, and those are absolutes. And with that in mind, they also have a faith. Through my own ordeal, I couldn’t keep my mouth shut as a teenager in Communist China. You guys in Poland have been through the same thing. So, the way they punish you is that first of all, they go after your parents because they can hold your parents responsible. Now, when I talk about feeling guilty and putting your parents through – for example, I couldn’t keep my mouth shut. I criticized government policies and my mom, a school teacher, got sent to the countryside to be reeducated by farmers.

Now, that really pissed me off. You can do something to me, because I’m responsible. But you try to take it out on my mom. And understanding the cultural background – you respect your parents, you have reverence for your parents, you love your parents and you’re supposed to take care of your parents. So that’s the same guilt and shame you’re talking about. [That’s why] I understand what’s going on in China right now. That’s why I’m predicting that we’re going to see a revolution.

Eventually, that didn’t change me. I didn’t keep my mouth shut and I spoke up and guess what! They sent me to the countryside to be reeducated by farmers. One of the punishments was that I had to use my bare hands to spread cow dung, fresh cow dung. I was lucky they didn’t kill me. But they did tell my parents that they could make me disappear in the night and my parents would have to pay for the bullet.

When you live through this kind of stuff, you think about what happened to the poor Falun gong [practitioners] and the Uyghurs, where 2 million of them are in concentration camps facing so-called organ harvesting. What is organ harvesting? You butcher those Chinese citizens and take their organs out and sell them for profit. That is organ harvesting. Nazis didn’t go so far as making a profit from selling Jew’s body parts.

So, when I see this, I realize that China isn’t only an Evil Empire, it’s a new Nazi. What should free people do? Stand up, fight and bring it down! Another thing is that faith does get you through. Take a look at what happened to those Falun gong [practitioners]. They’re still out there fighting even though they got butchered. What gets you through is your faith.”