Home Frontpage Rudy Giuliani: Those who support the Iranian regime have a Soviet mentality! 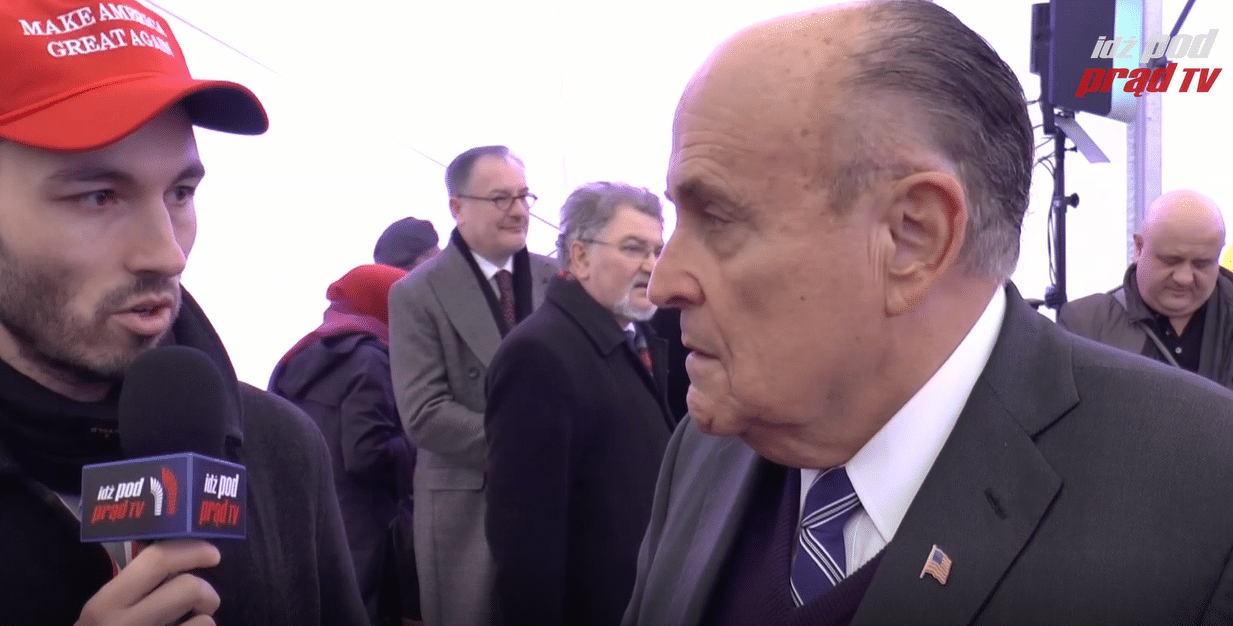 – The regime in Iran is just as much of a dictatorship as the Soviet Union. China, which supports the Islamic Republic of Iran, is doing a bad thing! Let’s ask China: why are they helping the number one state sponsor of terror in the world? – former Mayor of New York and one of President Trump’s legal adisors Rudy Giuliani in an interview with Against the Tide TV.

Ivan Belostenko: The major ally of Iran is China. Recently, in Poland, we’ve captured two spies. One of them is the director of Huawei in Poland, Warsaw the other is Polish intelligence officer. What do you think about the fact that the spies were captured and what are the threats of communist China to the countries like the USA and Poland?

Mayor Giuliani: I think it’s the same message to China as it is to any of the countries that are allies of Iran. The question is, for what purpose would you be the ally of a country that is the number one state sponsor of terrorism in the world? The only role that Iran plays in the world right now with the theocratic regime is to destabilize, to kill, to murder, to have assassination plots like the one in Paris last year on this very group, except for the much larger gathering, or the one in Tirana earlier last year. I can cite many many others.

I don’t think there is any nation that’ll be at this conference, that does question the fact that Iran is a state sponsoring terrorism, the number one state sponsor of terrorism in the world.  But what that says to me is, they’ve got to make major changes. And they have to be isolated until they do.

We see the progress we made in isolating them before. Even though it was partial. And I think the more of that, the faster we’re going to get to what the goal of the United States government is, which is a policy change. Or I have to say, the goal of this group, which has for some time been regime change. Either way, the end result would be a free, democratic, decent Iran. And any country that doesn’t support that, I think, has to be questioned as to what their motives are. Is it just their inability to see reality? Or is there a question of greed and wanting to make money and wanting to keep up favorable contracts?

IB: I just wanted to come back to the question I’ve asked earlier, about China. So once the current regime perhaps goes away and we have the new Iranian regime, what do you think about their future ties with China? Do you think that might pose a threat to them and also to other European nations and the USA?

RG: You know, so long as the competition for us, America, with China is economic and commercial, that’s a healthy competition. It’s where there is a competition of a military buildup, military power, that you have to get more concerned. So I’m not concerned about China doing business somewhere. We should compete with that and even do better.

I think Iran is a country that we’ve isolated and maybe they’re doing business with China, but their people are starving. That isn’t doing much good. I’ve seen videotapes of people in Iran, in Teheran, with signs saying they’re willing to sell their kidney for $200. Whatever the Ayatollahs are doing and the mullahs, and whatever China is doing to help them, it isn’t working.

IB: There are also voices in the Polish media saying that we should support the current regime in Iran. What do you think of those voices?

RG: I think they’ve lost sight of their own history. The reality is those would be the same people that would’ve said ‘we should support the Soviet Union against Poland’. Because the regime in Iran is just as dictatorial, just as blood-thirsty, just as oppressive – if not more than prior regimes, including the one that controlled this country. I think every Pole that has knowledge of his history would support freedom, democracy, and decency for the people of Iran.

It’s not going to happen when you have a major country, with tremendous resources, that is constantly trying to undermine all the governments in the region. It has undermined Lebanon, Syria, Israel, Saudi Arabia, the Emirates, Qatar, whoever they get their hands on. They’re attacking in Bahrain. They’re a source of a tremendous amount of terrorism in the world.

The viewers of the IPP TV support Free Iran!. Join the #FreeIran campaign: