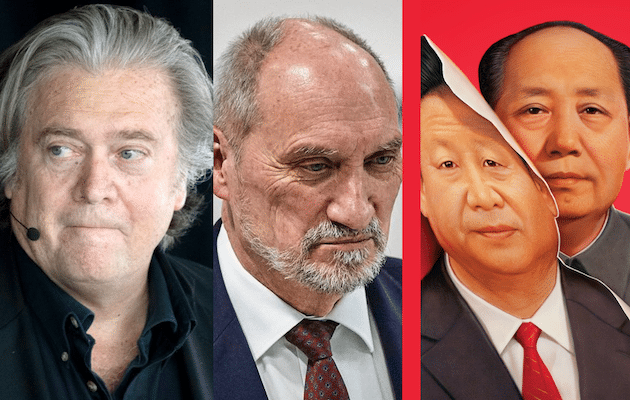 “They’ve already got a million people in slave labor camps and that’s not even counting what they’ve got with the wrong people. In China there have been five hundred elites that got murdered in 2018 and the world keeps silent. Don’t think that just happens, it’s an influence operation,” Steve Bannon said in Philadelphia on January 15. His speech triggered a discussion in the media worldwide. No medium has published it in Poland, though.

In a meeting at the World Affairs Council of Philadelphia, Steve Bannon, the former campaign advisor of President Donald Trump, warned against the communist China and a huge social engineering operation overseen by that country:

“China is a totalitarian dictatorship as bad as Nazi Germany in the 1930s. They’ve already got a million people in slave labor camps with the Uighurs and that’s not even counting what they’ve got with their own people. The Social Credit with the facial technology. If you go online and look at the videos every day. When I’m in London, a Russian gets poisoned and the tabloids go nuts. Khashoggi gets murdered and cut up and that’s awful but the House of Saud almost falls and it’s nonstop on MSNBC. In China there’s been five hundred, five hundred elites in 2018. Suicides, falling from 40-story buildings… The chairman of HNA, the largest financial company in the world falls of a wall in France at a church, overseen by the head of Interpol, a Chinese who’s now disappeared. A top actress in the world, they can’t find her. (…) Five hundred Chinese elites and a consolidation of power by a radical regime. Crickets. Why is that? Don’t think that that just happens because it happens. It does not happen because it happens. The influence operation on this and I’m not a conspiracy theory guy. The reason is system, the party at Davos. The nullification project. What happened today in Britain? No Brexit. (…) They fight back. What’s the system in England is pretty simple, the Goldman Sachs, the City of London, the global corporations, they want another vote to do over. (…) It’s a nullification project. But it is not a conspiracy, it’s in your face,” said Bannon.

“Bannon warns against the Chinese and the Left supporting them. It’s crystal clear. It’s a huge medial and political operation of the global Left to destroy the truth on Earth” – Pastor Paweł commented on Idź Pod Prąd TV LIVE. “China, the largest communist empire is a key player in this operation. That’s why those spies from Huawei have been caught in Poland – one was from the Internal Security Agency (that is practically from the government) and the other was the chief of the Huawei branch in Poland. How do media and politicians in Poland react to it? With silence. They are keeping silent, a deathly hush. While the whole world is talking about the scandal, neither the President nor the Prime Minister say a word about Huawei. In a normal country both of them would have to react. There would already be special statements issued.”

Most Polish politicians are in-love with communist China. One of the few who can see a threat to the free world posed by the Chinese regime is the former Minister of National Defense, Antoni Macierewicz. On Friday he gave an anti-Chinese speech at a Polish-American conference devoted to cyber safety that took place at the College of Social and Media Culture and was broadcast on the TRWAM TV. “At the NATO Summit in Warsaw in 2016, cyberspace was considered to be the same military action field as land, sea, airspace and outer space. It was obviously a result of the Eastern Bloc’s more and more aggressive operations, especially on the side of Russia and China.”

Macierewicz added ”Thank God for the recent arrests of the Chinese spies, who cooperated with former high officials of secret service overseeing cybernetics.”

Summarizing his speech, former chief of the Military Counterintelligence Service said: “We need to cooperate with the United States and Great Britain as closely as possible, as those countries have the most developed cyber safety systems and are most experienced in fighting with threats coming from the Eastern Bloc, including such countries as China, Iran and South Korea, even though other countries of the European Union don’t see them as a threat.

You can listen to the whole of Antoni Macierewicz speech broadcast by the TRWAM TV here: