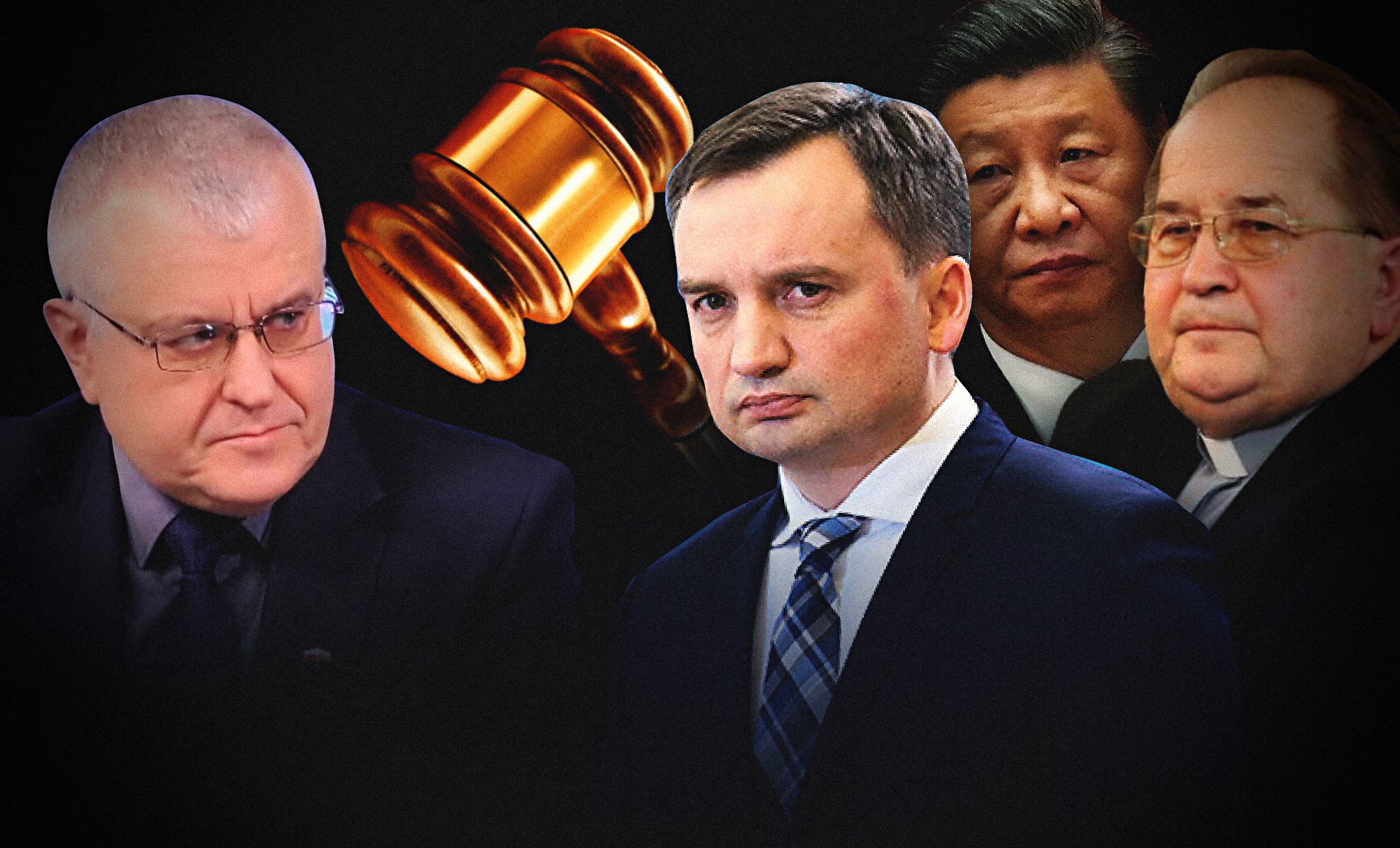 Pastor Pawel Chojecki has for years led a unique project in Catholic Poland to show the relationship of God and the Bible with history and politics. Thanks to this, tens of thousands of Poles have heard the Gospel, hundreds have been converted and many Protestant churches have been planted. By doing so, he drew the wrath of the Catholic hierarchy, which is losing believers en masse in Poland today, and the Communists and their supporters in the Polish government, who do not want an informed, anti-communist society. The punishment of Pastor Chojecki’s Against the Tide TV was demanded by a press organ affiliated with the Chinese Communist Party, the Global Times. After a short time, the Prosecutor’s Office, led by a Catholic minister sympathetic to China, secretly began collecting “dirt” against the Pastor and charged him with bizarre “crimes.” The first conviction was handed down on June 10, 2021, and Pastor Chojecki’s appeal hearing was scheduled for November 22 of that year.

Paweł Chojecki is the pastor and founder of the New Covenant Church in Lublin, as well as the creator and editor-in-chief of the “Against the Tide” television, magazine and publishing house.

Since the 1980s (while still a student) he has been involved in the struggle against communism. Not only in Poland, but also in other countries. In 2018, Pastor Chojecki received a personal thank you from Taiwanese President Tsai Ing-wen for supporting Taiwan in its fight against Communist China.

“We’ve noticed many people are using #SayYesToTaiwan to show support for #Taiwan’s #democracy. Thank you! At a time when the shared values we hold dear are being challenged, we pledge to keep building a more democratic world. Please visit Taiwan & experience a free & open society.” a spokesman for the Office of the President of Taiwan wrote about the Against the Tide TV campaign.

Two years later, in 2020 after winning the election, Taiwan’s President Tsai Ing-wen again thanked for the support from foreign friends such as Pastor Pawel Chojecki and Against the Tide Television.

In the same year, after the outbreak of the Chinese virus pandemic, the Against the Tide TV community, together with Taiwan’s editor Hanna Shen, collected the 100,000 required signatures for a petition to the American president for compensation from Communist China for the spread of the coronavirus. This was recognized by Solomon Yue, head of Republicans Abroad and a member of the US Republican Party National Committee, who said: “I remember that you offered and sponsored the White House’s “We the People” petition for holding CCP accountable. This is a very important petition and you succeeded. For two reasons. One: free people working together to hold CCP fascists accountable. Two: that gives us an opportunity to push for reparations for the Wuhan virus damages to our nation, to our people.”

Pastor Pawel Chojecki’s free-wheeling, anti-communist activities have been recognized by the world’s largest anti-communist organization, the John Birch Society. In 2018, Pastor Chojecki gave two lectures at the 60th anniversary of JBS on the history of Poland and the modern struggle against communism and the incredible success of Against the Tide Television.

As is not hard to guess, the activities of Pastor Chojecki and Against the Tide were also noticed by the Chinese Communists. In September 2019, in the center of Warsaw, the Chinese attacked representatives of Against the Tide Television who were protesting outside the CCP embassy, where the 70th anniversary of the founding of Communist China was being celebrated.

A year earlier, in 2018, following the “Say Yes to Taiwan” media campaign launched by the Against the Tide community, the Chinese Communist Party’s press organ, Global Times, demanded an explanation from the Polish Embassy in Beijing concerned that Poland might be supporting Taiwan’s independence. In response to pressure from the Chinese Communists, the Polish Embassy issued a statement that read:

We would like to kindly inform you that due to the appearance of articles and comments in the Chinese media space on 30/10/2018 regarding the YouTube channel “Against the Tide TV” – The Embassy of the Republic of Poland in Beijing issued a statement to the concerned media with the following content:

Poland was one of the first countries in the world to recognize the PRC in October 1949, and has consistently followed the “One China” principle in its policy since then.
The Polish Embassy does not comment on the activities of YouTube users, as Poland is bound by the constitutional principle of freedom of expression.

For several years, there was much pseudo-dirt collected against him. Every minute of the live programs he participated in, including his sermons in his congregation, was vetted. A few sentences were taken out of context, and in December 2020 the Prosecutor’s Office accused him of offending the religious sensibilities of Catholics, insulting objects of Catholic religious worship, praising the initiation of a war of aggression against communist North Korea (sic!), and insulting the Polish nation and President of the Republic of Poland.

The trial was a farce, the haters, who attack and insult Protestant Christians, were presented in court as wronged Catholics. The basis of the first-instance court’s verdict was the opinion of an expert witness – Ph.D. Elżbieta Przybył-Sadowska of the Institute of Religious Studies at Jagiellonian University. The expert admitted that Pastor Chojecki’s statements fell within the standards of Protestant-Catholic religious dispute, however, she found offense in the form and style of the sermons. The problem is that in this area Ph.D. Przybyl-Sadowska is not an expert. As a religious scholar, she specializes in the history of the Orthodox churches…

On June 10, 2021, the District Court in Lublin sentenced Pastor Pawel Chojecki to 8 months of restriction of liberty in the form of community service in the amount of 20 hours per month, as well as reimbursement of the cost of the trial – more than 20 thousand zlotys (~ 5450 $ as of that day).

In response to the court’s verdict, four appeals were filed: three in defense of Pastor Pawel Chojecki and one filed by the Prosecutor’s Office, which seeks a suspended prison sentence. According to it, only a sentence of imprisonment and a fine will allow the proper realization of preventive and educational goals against Pastor Paweł Chojecki “and will take due account of the needs for shaping the legal consciousness of society.”

After a year and a half of the verdict of the District Court in Lublin, an appeal has been set – for November 22, 2022.

A well-known columnist, Eliza Michalik, a journalist for “Onet”, stated that “the case of Pastor Pawel Chojecki is an exceptionally shocking case and a litmus test of democracy!”

Joe Losiak, an American missionary of Polish descent, co-founder of the success of the Oasis Movement and associate of Father Franciszek Blachnicki, wrote:

“Pastor Pawel Chojecki is facing five years in prison in Poland for his historic criticism of the Roman Catholic Church in his sermons. If this attempt to silence and censor the pastor’s sermons is successful, it will greatly damage the cause of Christ and continue to keep millions in the dark. The first critic of the churches in the world was the Lord Jesus Christ Himself in Matthew 7:21-23 and the first three chapters of Revelation. You must also silence the apostles Peter, Paul, James, John and Jude in the New Testament. [Jan] Hus was burned by the city council. Luther also insulted politicians and priests. Jesus insulted religious and government authorities. I am raised in America and it is different here. God and nation are not one and the same. Jesus was crucified because he offended the religious feelings of the Jews who had the truth but disagreed with Jesus.”

Pastor Paweł Chojecki asks for prayer, not for a just verdict, which he does not hope for in Catholic-socialist Poland, but for this shameful case to help spread the Gospel of free salvation in Jesus and to lift millions of Poles out of darkness and superstition.

Who really is pastor Paweł Chojecki? 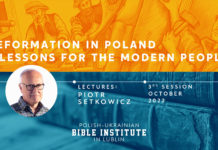 Reformation in Poland – lessons for the modern people. The third session of the Polish-Ukrainian Bible Institute in Lublin.