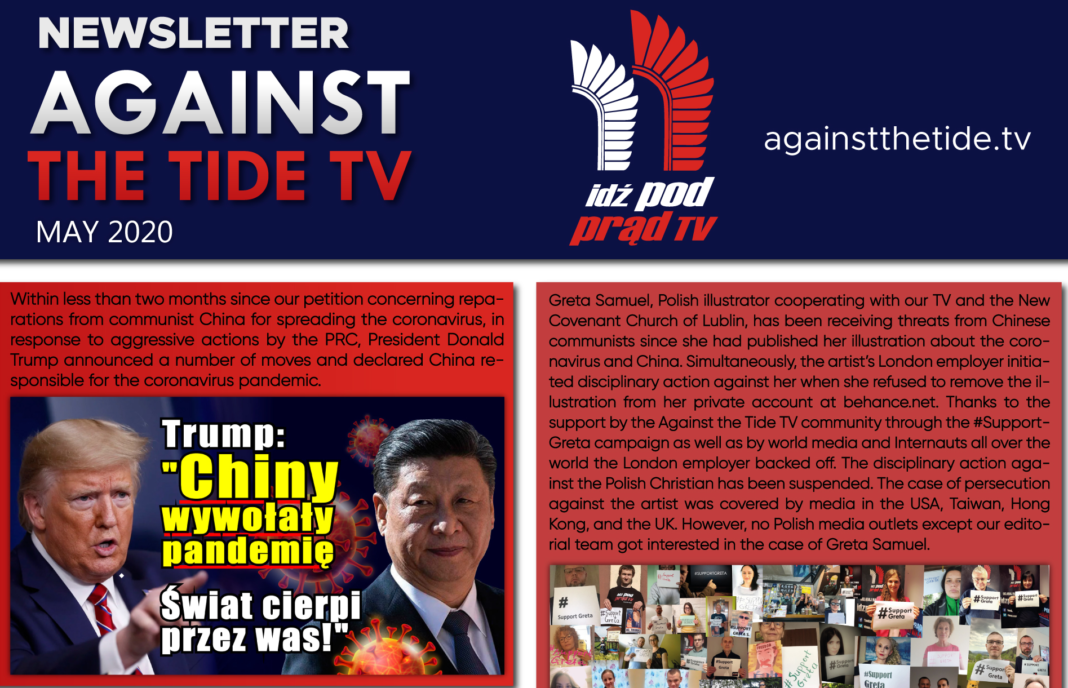 Within less than two months since our petition concerning reparations from communist China for spreading the coronavirus, in response to aggressive actions by the PRC, President Donald Trump announced a number of moves and declared China responsible for the coronavirus pandemic.

Greta Samuel, Polish illustrator cooperating with our TV and the New Covenant Church of Lublin, has been receiving threats from Chinese communists since she had published her illustration about the coronavirus and China. Simultaneously, the artist’s London employer initiated disciplinary action against her when she refused to remove the illustration from her private account at behance.net. Thanks to the support by the Against the Tide TV community through the #SupportGreta campaign as well as by world media and Internauts all over the world the London employer backed off. The disciplinary action against the Polish Christian has been suspended. The case of persecution against the artist was covered by media in the USA, Taiwan, Hong Kong, and the UK. However, no Polish media outlets except our editorial team got interested in the case of Greta Samuel.

Among the guests who appeared on our TV in May were: prof. James Tour, world-renowned chemist, Jennifer Zeng, Chinese-born journalist living in New York, David Matas, lawyer, human rights activist and author of the Kilgour-Matas report on forced organ harvesting in communist China, Joshua Philipp, American journalist of Epoch Times, and dr. Anders Corr, US military intelligence analyst and publisher of the Journal of Political Risk.

On May 16, the second film about pedophilia in the Catholic Church titled “Hide-and-Seek” (orig. “Zabawa w chowanego”) premiered in Poland. It’s has been watched by several million Poles. We were able to interview Marek Sekielski, the film’s producer, and one of the its main characters who had been abused by a pedophile priest. The latter stated on our TV that he no longer feels like a victim and calls for justice. Another guest of ours was Ekke Overbeek, Dutch journalist living in Poland, who was the first to investigate the matter of pedophilia among Polish Catholic clergymen. Also in May, we launched a new show featuring former Catholics titled “The Last Confession;” 20,000 people have watched the first episode.

In their report titled “The Virus of Hatred: „A Brown Book” of the Epidemic,” the leftist „Never Again” Association (Polish: Stowarzyszenie “Nigdy Więcej”) dubbed Against the Tide TV and the New Covenant Church of Lublin a sect and a “far-right” movement. The report has been quoted among others by “Gazeta Wyborcza,” the main liberal newspaper in Poland. It also targeted our correspondent in Taiwan, Hanna Shen, the editors of “Epoch Times,” and the Falun Gong movement. In response to our demand for rectification the term “sect” has been changed to “religious group.” Simultaneously, the public TV called our church a sect for the second time.

In May, we started equipping our new studio. We would like to finish its construction in June. We are grateful to God for continued financial blessing. Last month over 1000 donors supported us again!

We have launched a new show for children titled “History Explorers’ Club.” The first episode was devoted to Sumerians. The purpose of the show is to present to the youngest audience how modern knowledge intertwines with the information contained in the Bible in a light and accessible way.

In the beginning of May, we organized our Second International Creationist Conference. You may now view the most interesting fragments and reactions of the conference’s participants. The speakers were: Eric Hovind, coproducer of the film “Genesis: Paradise Lost” and president of Creation Today, and Helmut Welke, founder and president of Quad City Creation Science Association. The material is available both in Polish and English:

EXCLUSIVE: Pastor Paweł Chojecki: There will be an appeal against the verdict! Poles are the victims!

Pastor Chojecki sentenced to 8 months of restriction of freedom for criticizing Catholic Church and the President!

Law and Justice’s prosecutor demanding 10 months of prison for Pastor Chojecki! The verdict on June 10